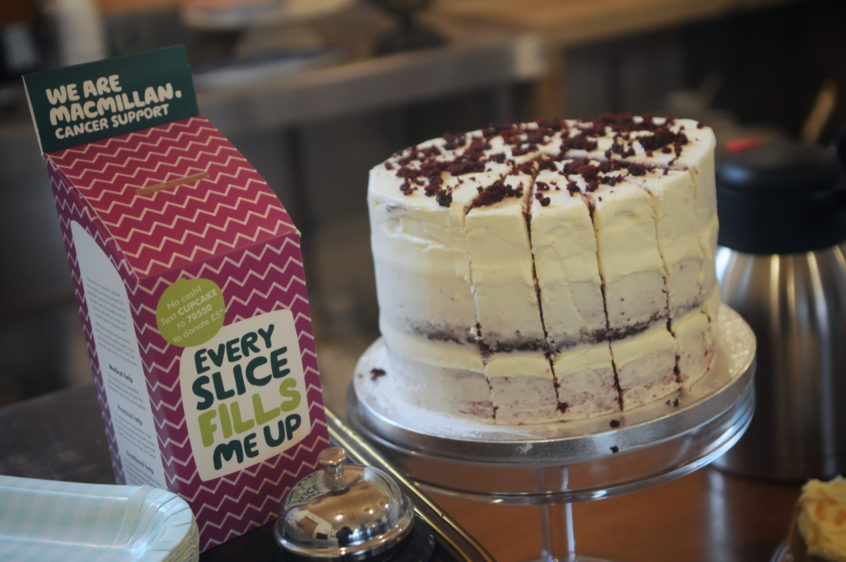 On Friday 30th September, we gathered at 44 Harpur Street; The Business Parlour to raise money for Macmillan Cancer Support.

We ate cake, played records, and drank plenty of tea and prosecco! I think we can all agree that number 44 is a fantastic place to hang out to work or not work… 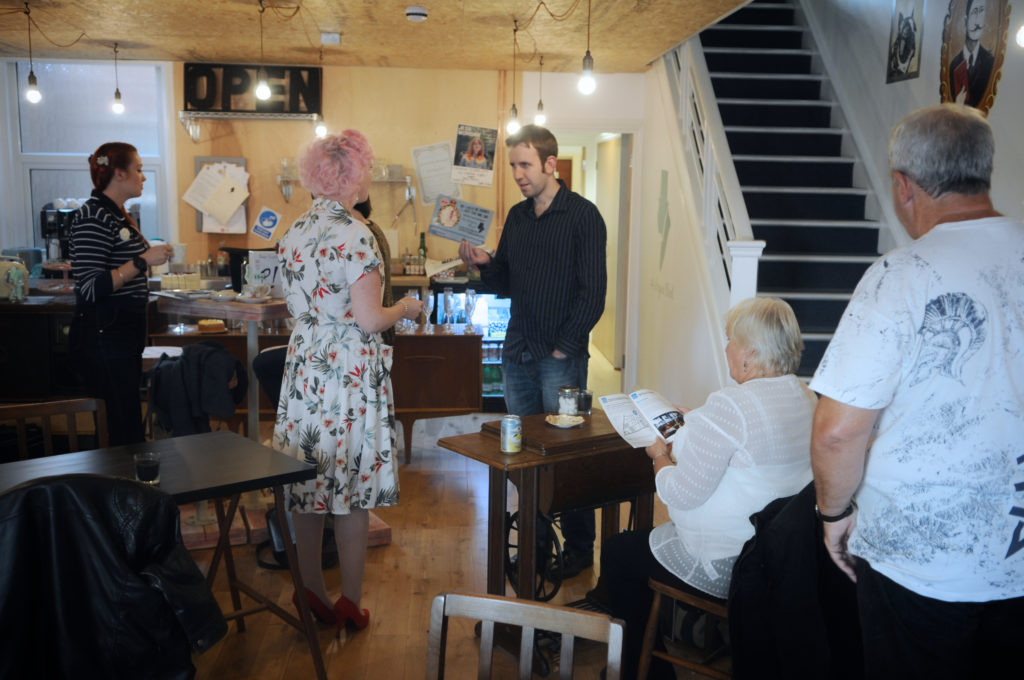 All in all, we raised £250, which equalled the amount raised by the No Fuss Networking event that we held earlier that day. That’s a total of £500 going straight to Macmillan. I want to say the most enormous thank you to everyone who came along to the vinyl party for their generosity. 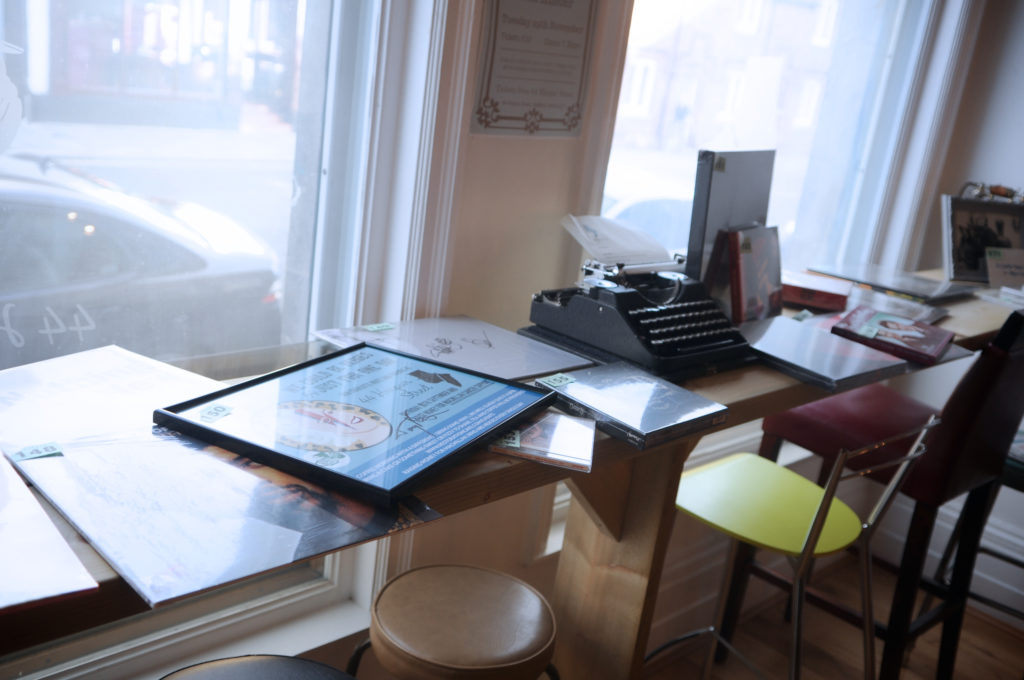 However, I think a few of you went home with some amazing music and memorabilia. In the end, we had so many amazing prizes donated to our event that the Rock’n’Roll Raffle became a Tombola! I spent a happy hour ticketing up all of the prizes and carefully folding a few duff tickets too into a top hat… which became known for the evening as Slash’s hat. 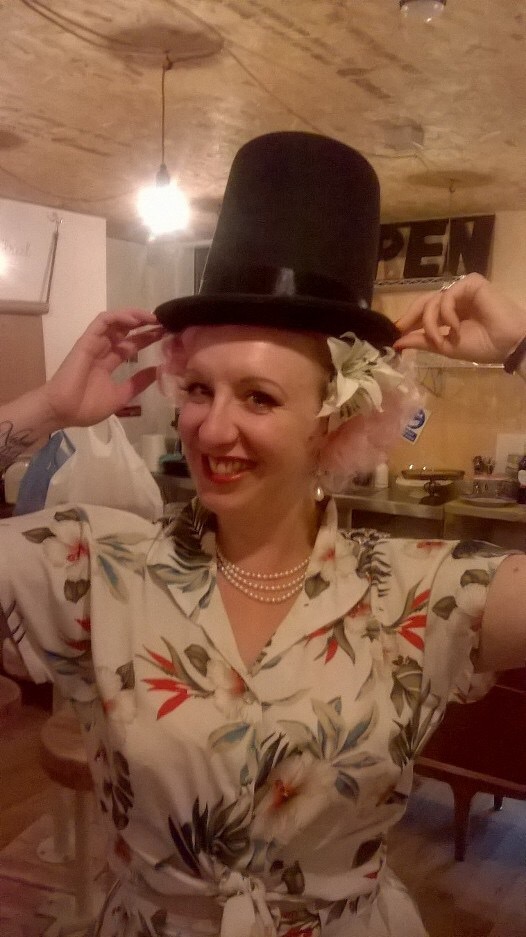 I couldn’t resist trying on the hat

Our wonderful photographer Jez Brown bought our first 10 tickets and took home 5 prizes, including a pair of tickets to Hedna’s Vintage Nightclub in December, kindly donated by Harry & Edna.

You can hear the interview that Harry got with me at the event at 7pm on Wednesday 5th October or later via the catch up service – which I will share with you on Thursday.

Thank you to Jez Brown, not only for taking pictures for me but also for bringing the record player! 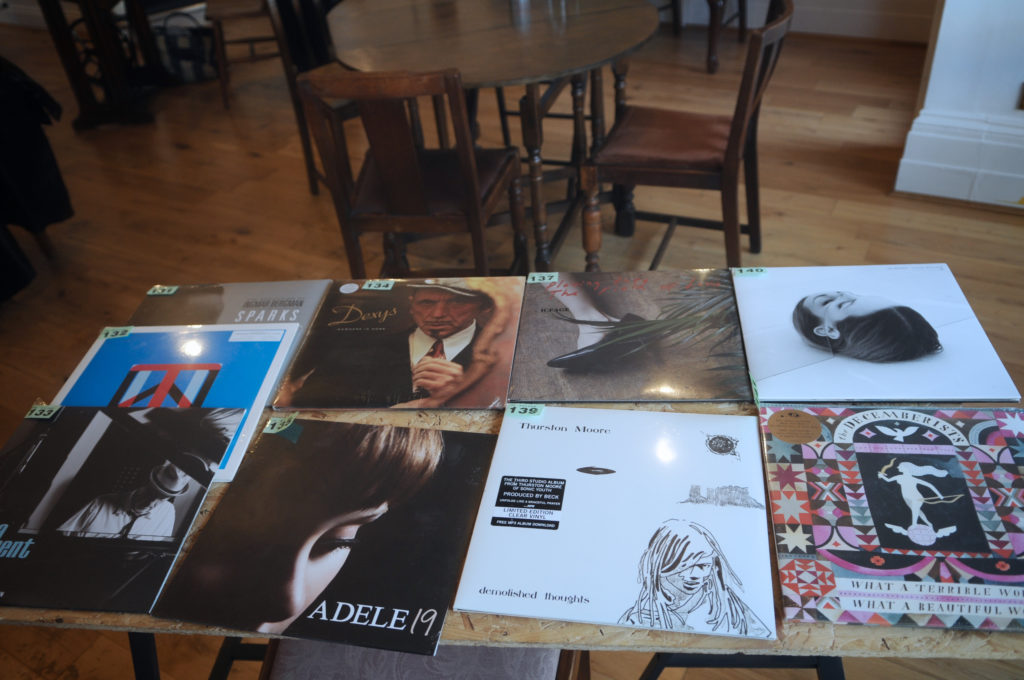 I was truly taken aback by the generosity of the music industry when it came to donating records and CDs for our fundraising. Thank you to each and every one of the following:

Thank you to my wonderful husband, Chris, for contacting all of the above and for the original idea to have some kind of raffle thing going on! You are the brains of this operation.

In keeping with our rock’n’roll theme, thank you to Gareth Barber at Bedford Esquires  for donating a pair of guestlist tickets to any show at your rather fabulous venue. In a wonderful twist of fate, Chris won these so I hope that he will be taking me to a show soon! 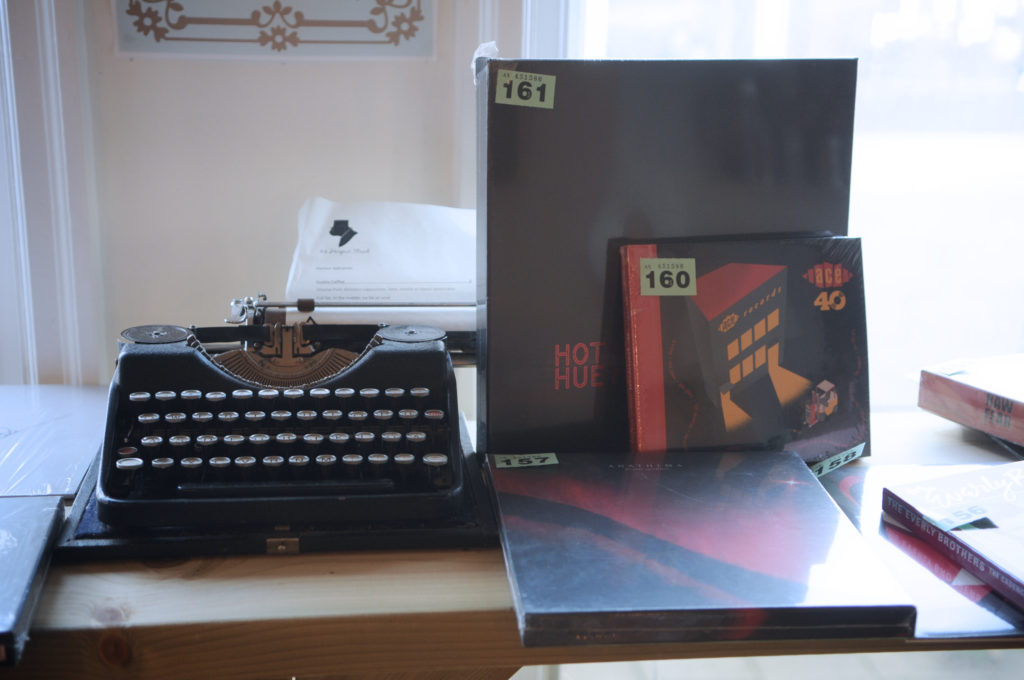 An extra special personal thank you to Paul Cullen at Macmillan Cancer Support not only for donating a signed Rick Wakeman CD but for also sending a second copy to go to my prog-loving Mother. She donated a large note to the cause and I’m pretty sure the fact that Rick Wakeman touched that CD counts as her Christmas present too!

Frankly the only person that I wasn’t going to rugby tackle for the framed copy of our event poster signed by Tony Visconti was the man who designed the poster. Thank you so much to Jason Kahl for giving your time and artistic skills to this cause. 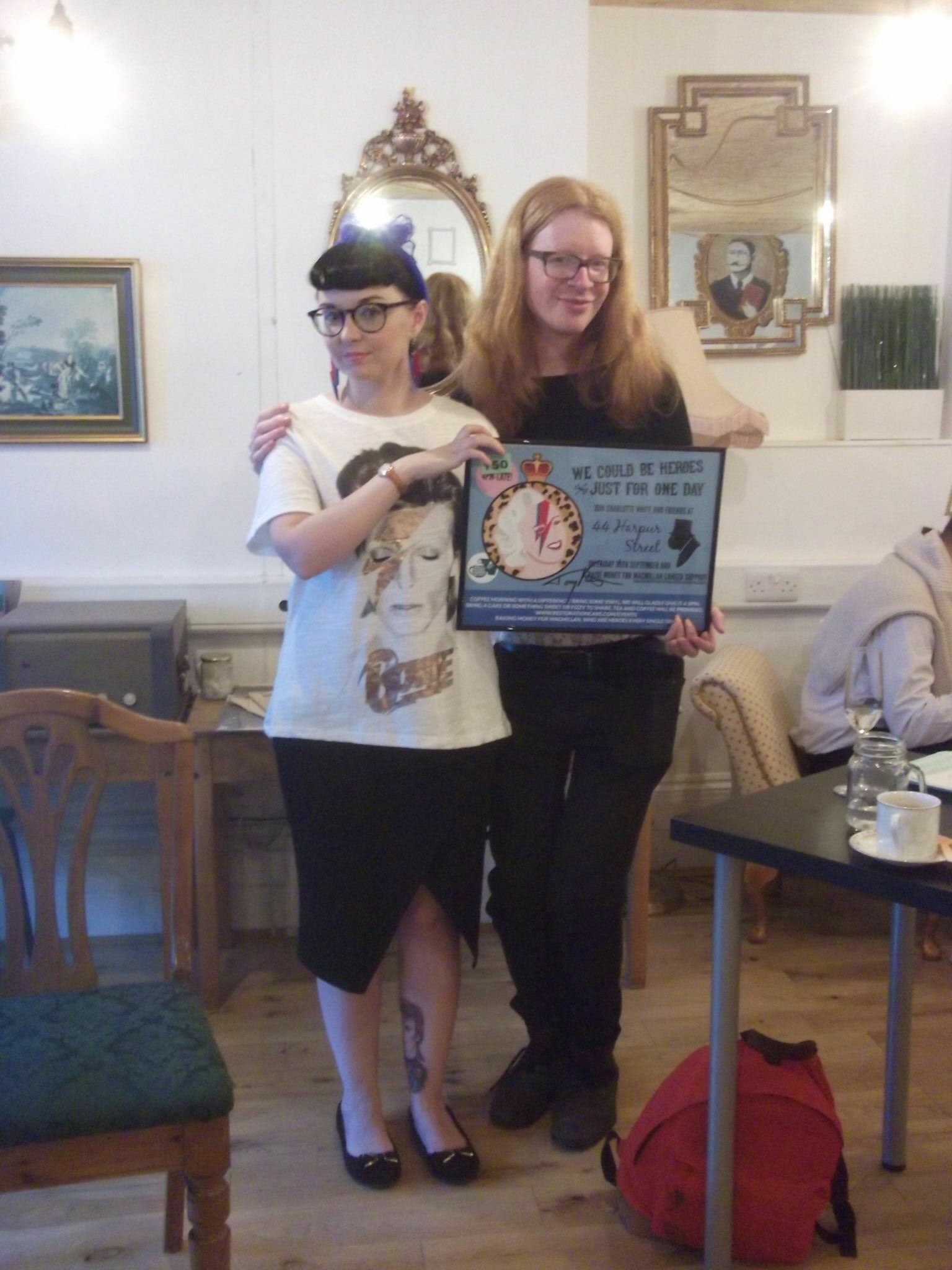 Victoria and Jason Kahl with their star prize

Thank you to Paul and Maria at Mailboxes Etc in Bedford for printing the posters so beautifully for us and to all the folk who put them up on display. These acts of generosity made it possible for us to get the word out on the town.

Sarah Clarke at 44 Harpur Street, you have been an absolute angel in letting me take over your stunning work space for this fundraiser. The Business Parlour donated all money taken that day to Macmillan as well. For a small local business, this is a massive deal so I want to thank 44 Harpur Street from the bottom of my heart. 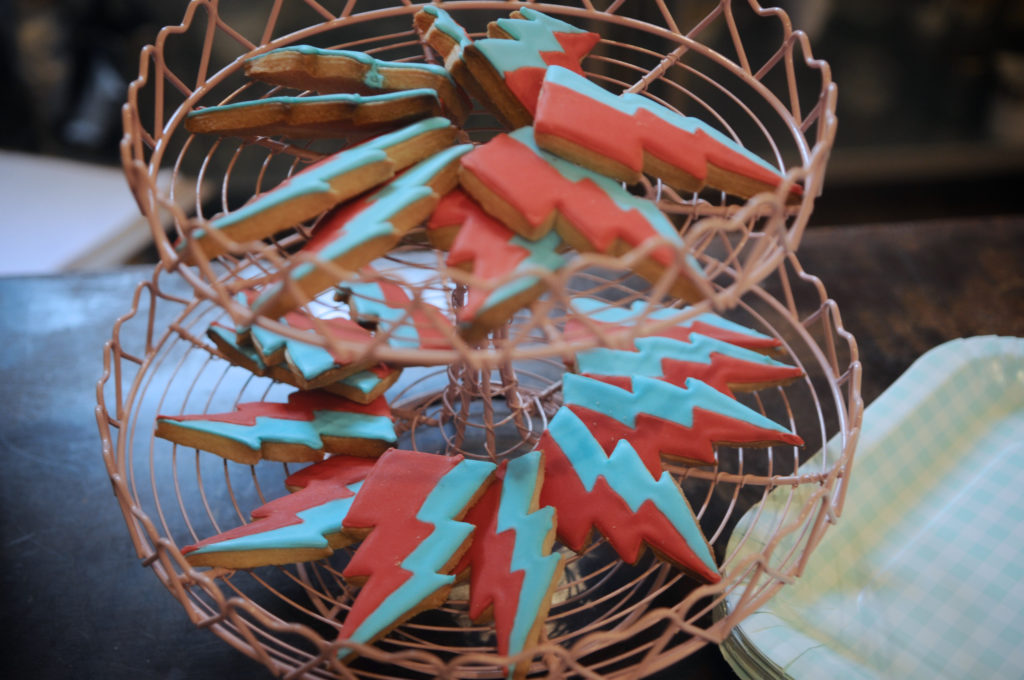 I hope that your own World’s Biggest Coffee Morning events were a big success and that Macmillan smash the money raised last year. Never underestimate the incredible generosity of people. I could not have done this without all of those mentioned. Thank you all.