I have written a few times about my love of live music and of my local independent music venue, Bedford Esquires. I’ve been the girl who shows up with cake for the bands on more than one occasion.

I’ve dedicated an entire blog post to the man behind Bedford Esquires in I Would Love to Bake a Cake for… Gareth Barber and I’ve practically preached the importance of supporting your own local independent music venue in my podcast Fantasy Bakes: Louise Wener & the Women of Britpop It is safe to say that I love live music, love new bands, and am prepared to put my money where my mouth is in order to support them.

Last Thursday night, I went down to Esquires to check out a new (to me) band called The Slow Readers Club. I knew nothing of them except that I had heard them played on BBC 6 Music. Then I fell a little bit in love and this blog post came into my mind with appropriate timing. Very appropriate timing as this Saturday 13th April is Record Store Day. 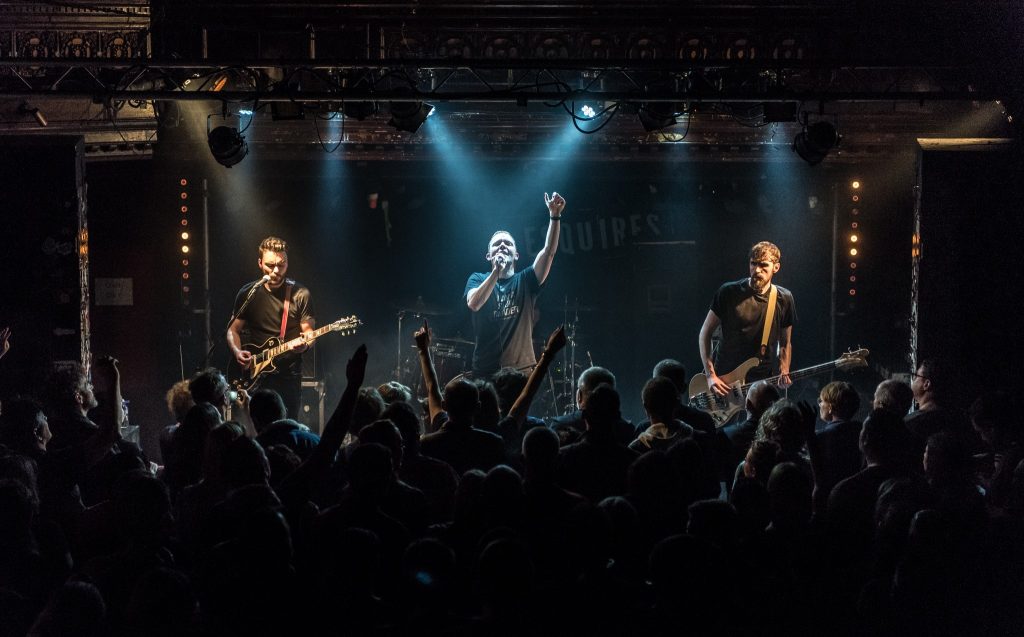 The Slow Readers Club have a sound that can be likened to The Editors or to the last third of a song by White Lies, after the drop. Energetic, at times euphoric, with a close knit almost dance-like beat and bass line running through each song, The Slow Readers Club are funkier than your average Indie Rock outfit. I knew that I was going to love them from the moment that they stepped out onto the stage to the pulsating rhythm of Donna Summer’s I Feel Love. I turned to Chris and wondered how any band could hope to follow Giorgio Moroder…

Front man, Aaron Starkie, has the vocal range to feature on any Moroder collaboration! There were moments in which he slipped effortlessly into the most glorious falsetto, bringing a comparison to Jimmy Somerville to mind. 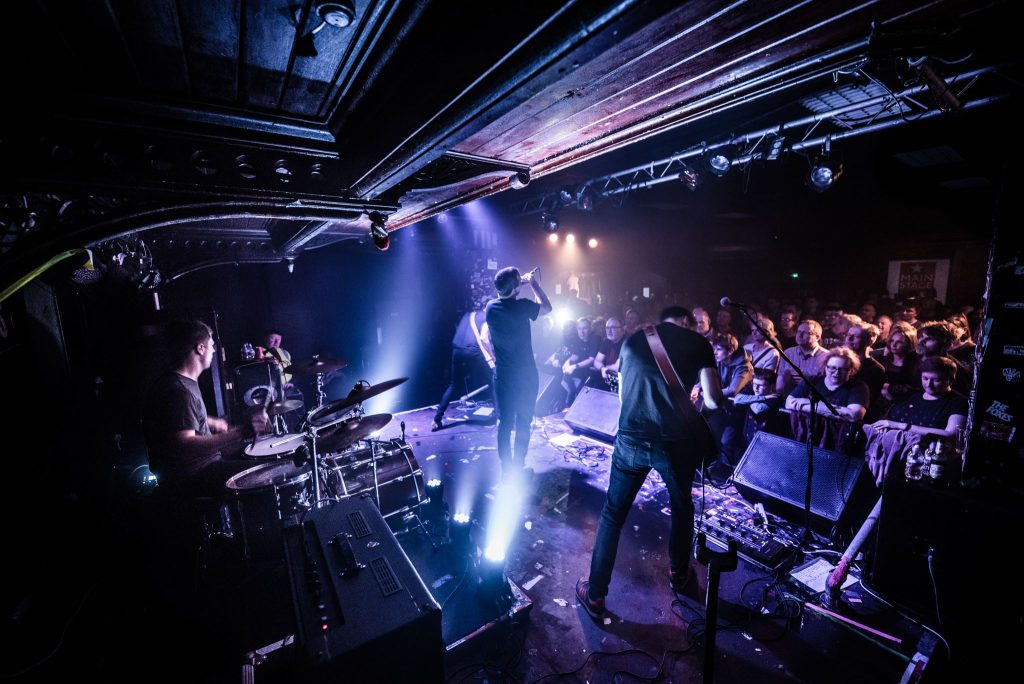 Bedford Esquires was packed full of fans who had traveled from goodness knows where to see this new (to me) band. Though I came to the show on the strength of a few songs played on the radio, the crowds had come pre-loaded with the lyrics of every song that they played and material from three albums. They enthusiastically sang along, cheered each song as it was announced, and held hands aloft at the appropriate times. The strangest thing for me – being a child of the 80s – was their ritual of cheering the band with the refrain REEE-DERS, REEE-DERS, which at first sounded so much like what fans used to cheer at Gary Glitter concerts LEEE-DER, LEEE-DER that I was a little perturbed.

Thoughts of disgraced pop stars of the 70s aside, it was wonderful to find myself suddenly immersed in a following that I had no idea existed. This new (to me) band have a large and dedicated following. I knew this before we arrived as the car park was full.

Then Aaron said something which inspired this blog post; he thanked the crowd for buying their latest record and spoke about how the band had been able to quit their dayjobs and become full-time musicians off the back of this support. He rewarded this loyalty by playing a new track. Personally, I thought the new song was one of the best that they played and this secured my fandom going forward.

He said that because the band had been able to go full-time, they had spent a couple of months writing new material.

To me, this is everything. If you love music, you have to support it by buying it. The Slow Readers Club are able to make new music for their fans because their fans bought their albums, bought tickets to see them live, bought a t-shirt from the merch stand. We live in a wonderful world in which we have the luxury of trying before we buy – no longer the excitement of playing that album you selected based purely on the cover art and hoping that it wasn’t shit – Spotify lets you listen for free BEFORE you go out and buy the physical product. If you don’t buy music, it won’t get made. We will live in a world filled only with auto-tuned plastic. Art is not free because musicians have to pay their rent/mortgage/bills just like you do.

The Slow Readers Club are an exciting emerging success story. They were supported by Bridges.

Because I enjoyed their set, I went over to their merch stand and had a chat with them. I asked for a picture and they sweetly obliged.

I picked up a copy of their latest EP, which they signed for me! 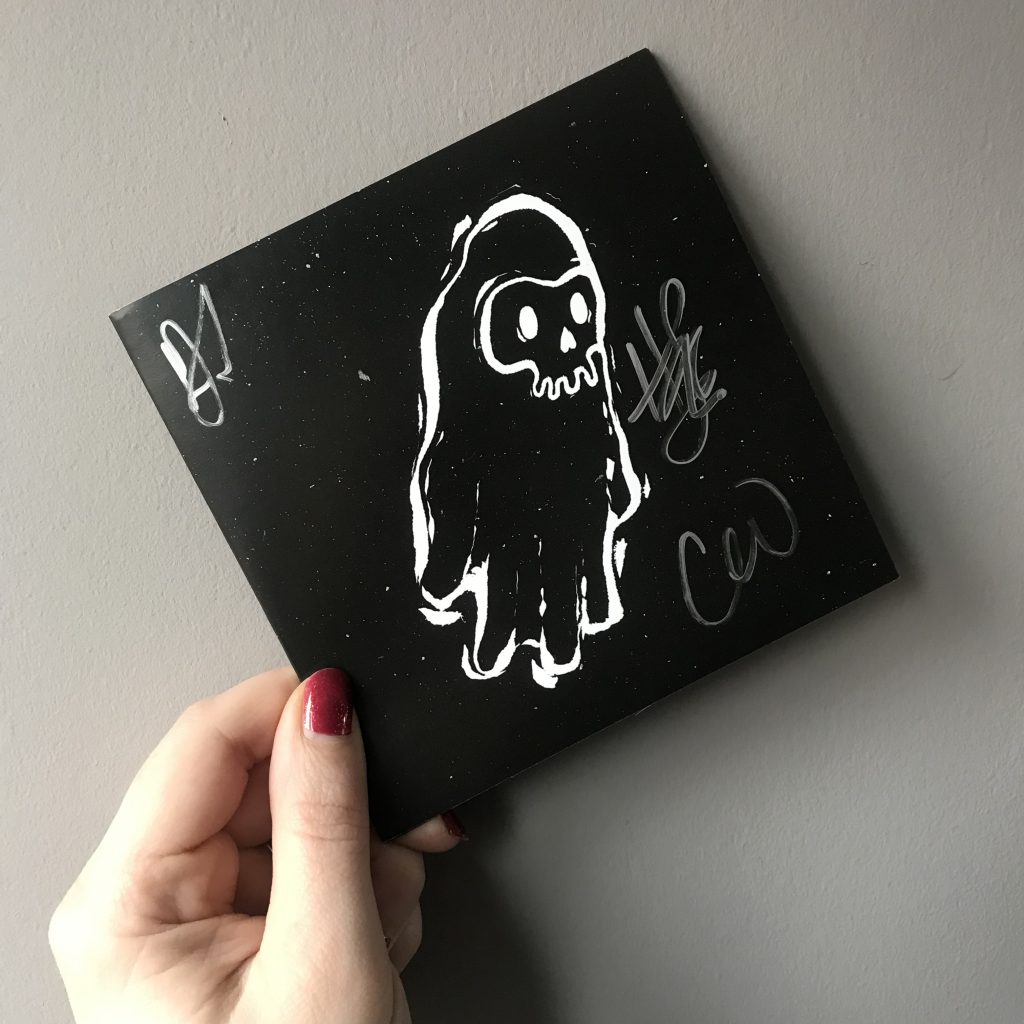 My philosophy of supporting new music extends beyond the headline act and I will always buy a CD from the support band if I like them. Allow me to tell you why – I see £5 for an EP as a tip for a show well-played and an expression of my faith in their future. By buying a CD I have put a little money in the pot and maybe contributed enough for a few Mars Bars in the tourbus but I have also invested in the band’s future. The signatures on this first EP may be worth far more than my little fiver one day when the band take to the stage at Wembley, or the O2, or the Pyramid Stage at Glastonbury. I have nothing but faith in new bands and artists and will back them all the way. By spending a little cash on the merch stand YOU are supporting these dreams.

Every single band that you love got their start in a small independent music venue, trying to sell short runs of CDs. Maybe skip a pint at the bar and put that money towards a new band.

This brings me back to Record Store Day, which takes place this Saturday. I love a good record store and we are incredibly lucky to have Slide Records here in Bedford – a relatively new store, it has become an essential part of our town. There will be all kinds of fun things happening in record stores up and down the country, as well as lots of limited Record Store Day releases. There will be crazed collectors queuing for hours awaiting opening time so I would recommend visiting after 11am if you just love music and want to see what it is all about!

I will be going down to Slide Records with a few things on my shopping list. I hope that they have a copy of the latest The Slow Readers Club album in for me!

I would love to bake a cake for The Slow Readers Club to celebrate their continuing success and to Bridges to anticipate theirs.