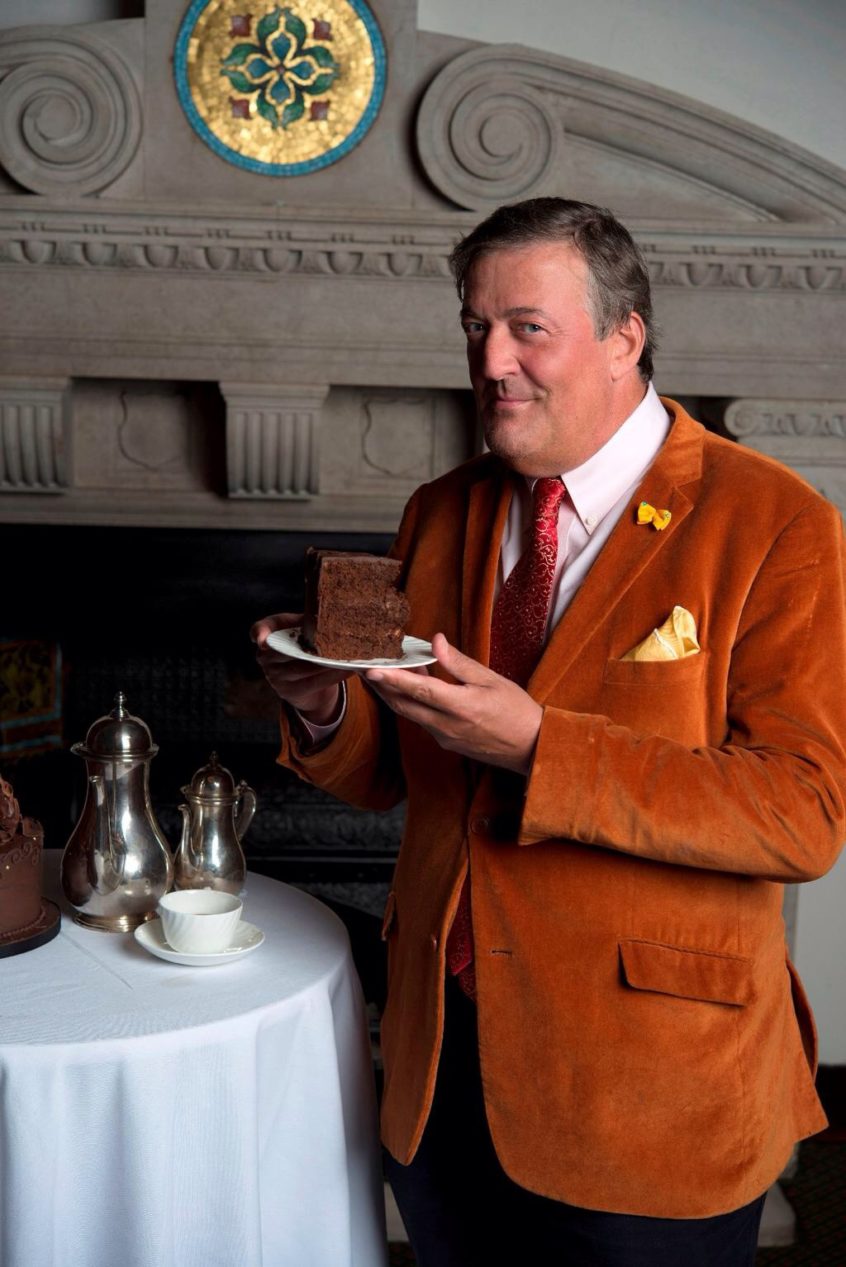 Sometimes I am lucky enough to bake for a celebrity. I say this with a massive disclaimer; I am a total bitch when it comes to celebrity, a judgmental bitch. You see, we can all be famous for fifteen minutes now so what really gets me excited is longevity. It is one thing to be good for a while but to keep that up for decades, that is truly impressive.

“Thousands of people have talent. I might as well congratulate you for having eyes in your head. The one and only thing that counts is: Do you have staying power?” Noel Coward

I do not find myself going gaga for people who are ‘off the telly’ because they are, after all is said and done, just people. I have met some wonderful WONDERFUL folks who garner the kind of crazed response from fans that just seems insane to me – I’m the one offering them a cup of tea and somewhere quiet to sit for five minutes! I like to think that I’m pretty cool in this way.

I even managed to hold my shit together when I met Dame Vera Lynn and you cannot get much more iconic than the Forces’ Sweetheart. I waited a full 24hrs after meeting her to break down in tears over a spaghetti bolognese. That is a true story; I was cooking dinner the next day and the impact of meeting Dame Vera hit me like a freight train. I wanted to call my Grandad who would have been insanely proud and would have dined out on that story for months, but he was no longer at the end of such a convenient line. Hence crying into my Quorn.

There is only one known occasion of me losing the ability to function in front of a celebrity and that was the time that I met Stephen Fry. 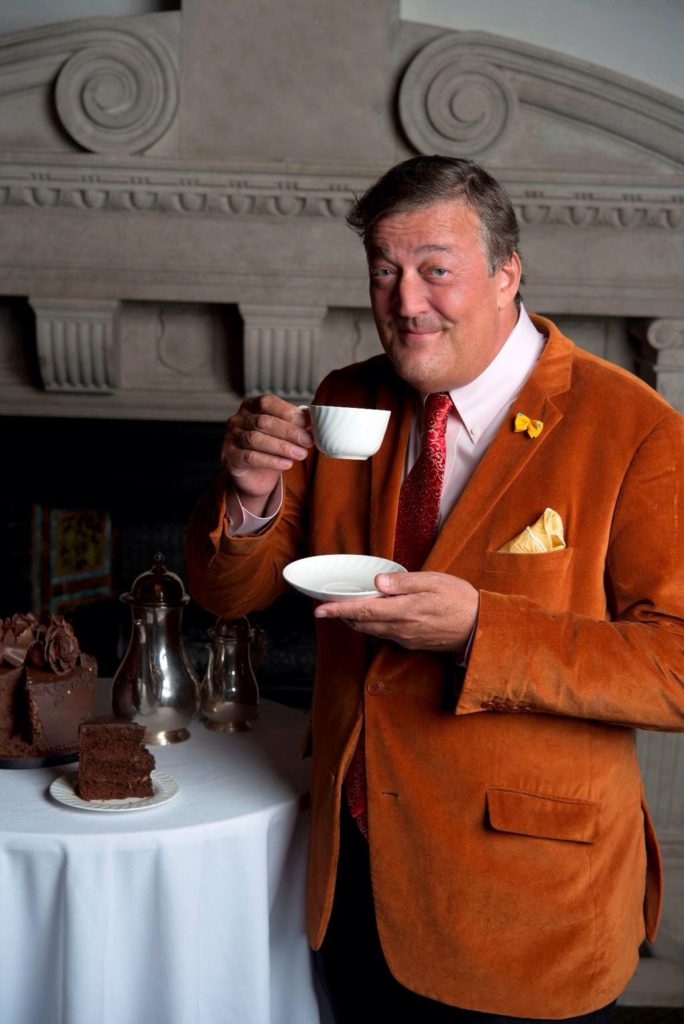 I had been asked to bake a chocolate cake for Stephen Fry by the lovely people at Macmillan Cancer Support. In the build up to one of their hugely popular World’s Biggest Coffee Morning campaigns, Macmillan had surveyed the Great British public to decide upon their favourite cake and the celebrity who they would most like to enjoy a slice of cake with. The polls came in and chocolate cake was the winning slice, alongside Stephen Fry as the winning Coffee Morning dream guest.

As I delivered my offering to the room in which these photos were to be taken, I was suddenly filled with trepidation. I was about to meet General Sir Anthony Cecil Hogmanay Melchett!

I grew up with Blackadder. I saw more of Baldrick, George, Flashheart, and Melchett than I did some members of my own family; the actors being as present in my young life as any Uncles, the inappropriate ones who make you laugh by saying rude words like bum, fart, and willy. The Young Ones was another perk to growing up in the 1980s, my Brother and I being allowed to watch any and all of this on the strict proviso that we did not repeat the language.

Side note… the first of two trips to see the Headmaster at school (both a result of my witty writings being found and deemed inappropriate) occurred aged around 7 or 8 with a joke in which the punchline was the word willy. I rarely got into trouble at school as I could often talk my way out of anything serious but these early willy jokes quickly matured into biting satire, which teachers rarely appreciate when they are the subject of the punchlines. Within 5 years, I had gone from the offending willy to being ‘openly offensive to 36 members of staff.’ Quote. True story. Bad Charlotte. 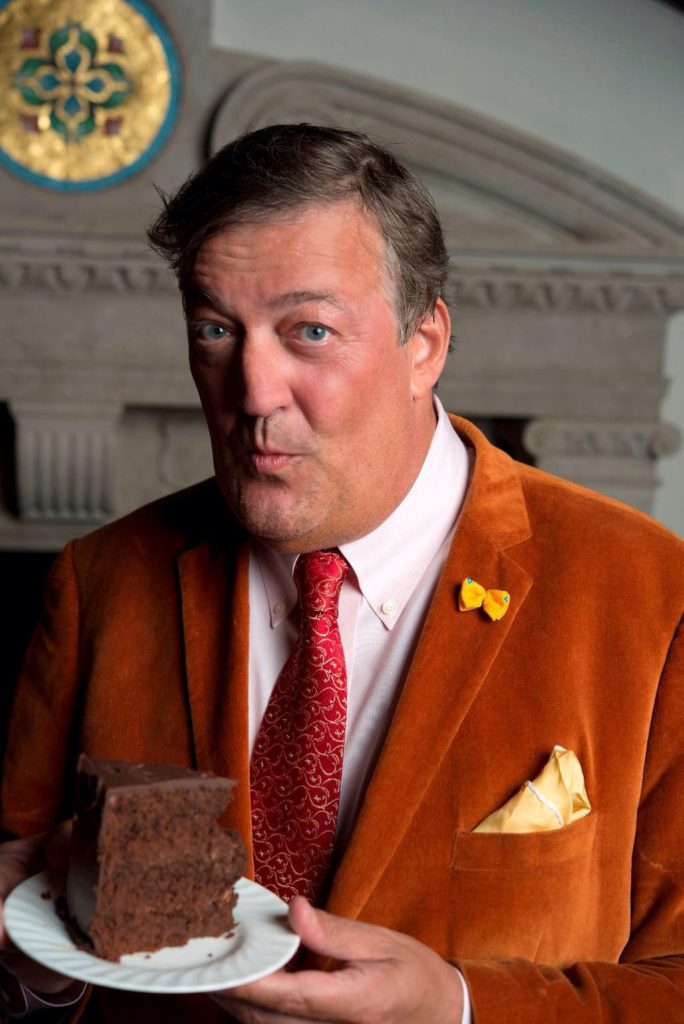 Stephen Fry was everything that I had hoped he would be and more; towering over everyone in the room with majestic stature and presence, everyone seemed to orbit the room around him in the way that they only do with true stars.

My voice became lost and it was all I could do to smile with my mouth shut. I so desperately wanted a Melchett-ism…

… but what I got was pure Fry. The charm and the wit of the man was radiant and, again, I could offer nothing in return but a weird simper which is so not in my nature. When Stephen Fry admired the chocolate cake that I had presented for the photograph, he commented that it looked like a lovely hat and remarked that the hat I was wearing was also lovely. I may have responded with a weird inwards giggle type sound. Who was this strange pathetic woman inhabiting my body?

It is one of my few regrets that I could not pull myself together sufficiently to ask for a photograph of us both together but when I look at these souvenirs, used by Macmillan to launch their campaign, I can recall exactly where I was standing behind the lens. That is my cake. I baked a cake for Stephen Fry.

Of course, I have been thinking of the great man a great deal over the past few days. The press has a strange confusion between the words secret and private; Stephen Fry has not been secretively battling cancer like a cheating spouse or a squirrel who is up to something, I doubt very much that this battle was secret from his loved ones. Stephen Fry has privately been battling cancer and, in sharing his experience, he may inspire one or two men to get themselves checked for Prostate Cancer. It’s not necessarily going to be the most pleasant visit to the GP that you will ever have but early intervention saves lives.

Today, I would love to bake ANOTHER cake for Stephen Fry in the hope that it would speed his recovery and make him feel fabulous again. Maybe I would have the nerve to say a few words to him on this next delivery… probably not… maybe I could manage a silent hug though.

Oh, and I’m just going to leave this link here for the amazing Macmillan’s information on Prostate Cancer. Click here if you like. Believe it or not, the first test is not the one that you are thinking… it’s a blood test.