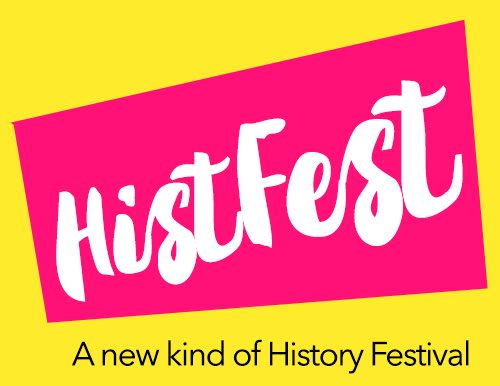 Regular visitors to this blog or to my website in general will likely know that I have something of a passion for history. Anyone who knows me or has spent any time with me will know that I am a massive history geek who is either consumed within a history book, writing about the seventeenth century, or banging on about the life and times of King Charles II until the subject of conversation is changed.

Don’t worry, I can bring us back round to him easily enough! 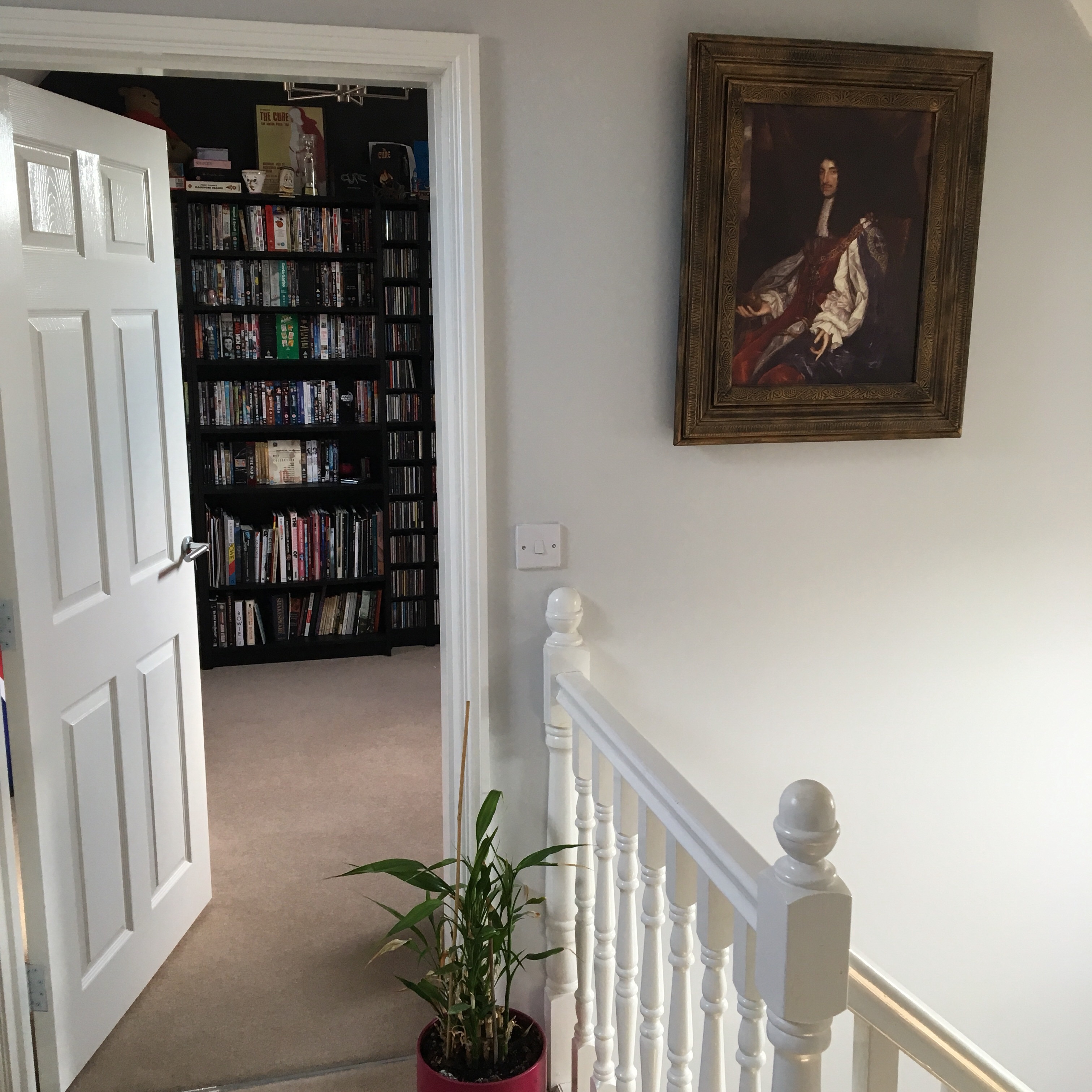 My poor darling Chris has lived with a portrait of the King hung in our home and various framed postcards of Van Dyck portraits displayed in pride of place like family members. As I type this, I realise that I have not printed and framed a photo for many many years and most of the pictures we do have were given to us! I’ve had to buy a whole new bookshelf to dedicate to my collection of books on my chosen period of history and new additions constantly drop through the letterbox – oh, Amazon, how I adore thee! 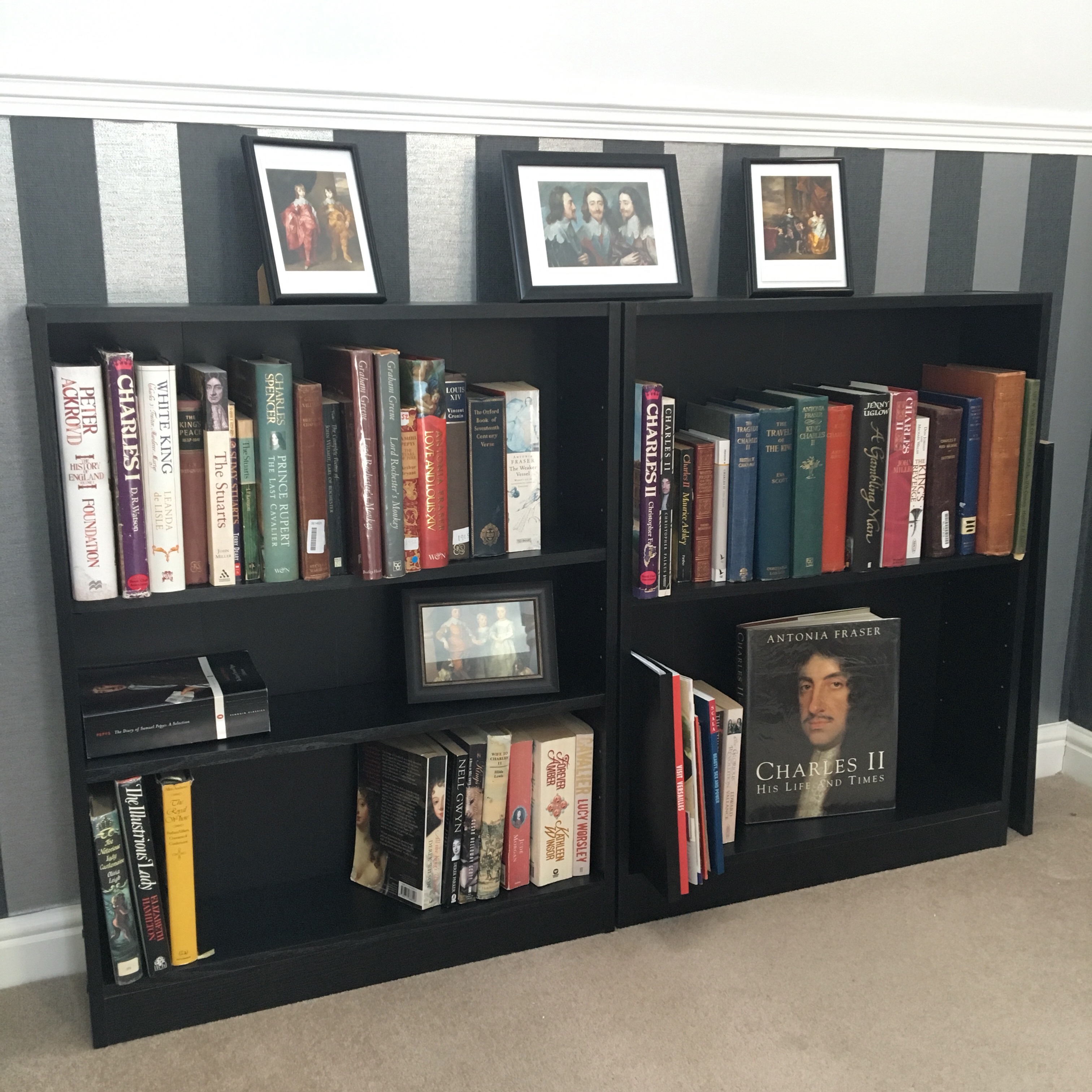 The bookcase of dreams

My area of interest lies around the reign of King Charles II, which I date 1649 – 1685. This is a controversial start date as most history books will tell you that King Charles I was executed in 1649 and his son did not take his throne until 1660 (this date begins the period known as The Restoration, the inspiration for the name Restoration Cake) but I choose not to recognise the Commonwealth of Oliver Cromwell as a legitimate rule. My own opinion is that the Commonwealth was a military coup.

Herein lies the wonder of history; this is my opinion based on my reading and my personal prejudices, what’s yours? Reading further back, I identify as a Yorkist in the War of the Roses and I don’t believe that Richard III killed his nephews in the tower. I’m skeptical that both of Edward IV’s male heirs were kept in the same place anyway. I’ve had long conversations with others who disagree with me and that’s fine; history allows us to disagree over the facts as presented with a few hundred years of hindsight and learn more from an alternative perspective.

It’s not like arguing with your Dad over Brexit.

For a history geek such as myself, having the opportunity to talk to other history geeks is a joy. This is where the subjects of today’s fantasy bake come in; I would love to bake a cake for Rebecca Rideal and Dan Morelle as they are launching a brand new history festival in London this December called HistFest!

The event will be held on 7th-8th December 2018 so put those dates in your diary now and click here to sign up to the website for updates etc.

The list of speakers already announced is incredible – Dr Janina Ramirez, Greg Jenner, and Amber Butchart are three that I am dying to see but there are loads more already announced with more promised. Click here to see the list so far.

As for Rebecca and Dan, getting anything new off the ground is a challenge, and doing it in London can sometimes feel like screaming into the abyss. The HistFest twitter account has rapidly become one of my favourites because of the fairly constant stream of amazing speaker announcements and they have even set up a HistFest group on Facebook. Joining that has been a pleasure because members are introducing themselves and their area of expertise to the group – for a history geek, this is like THE BEST people watching ever. If you identify with any of this post, I would urge you to join the group as it seems really friendly and oh-so interesting.

I know how much work organising a festival is and I only have one tiny corner of Foodies Festival to manage, with no responsibility for anything too logistical or technical, so I doff my cap to Rebecca and Dan who have co-founded HistFest whilst carrying on with their day jobs! 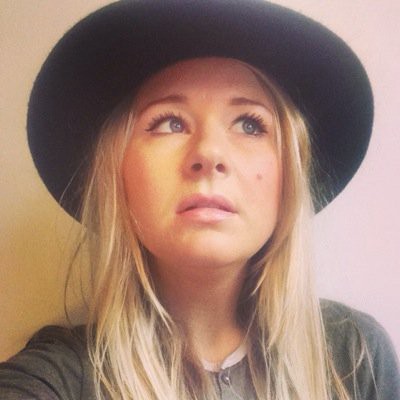 Rebecca Rideal is a historian, writer, and consultant specialising in all things seventeenth century (which you know is why I kinda love her). We ‘met’ on twitter, chatting about her book 1666: Plague, War, and Hellfire and I was lucky enough to meet Rebecca in real-life at a talk she was giving about the trial of King Charles I.

In addition to launching HistFest, Rebecca is working towards her PHD. Work much? I admire her awesome work ethic and relish the opportunities that we have had to be geeky together.

Dan Morelle is the co-founder of popular podcast History Hit, presented by Dan Snow, and produced over 250 episodes. I cannot recommend it enough – they get some amazing experts in to talk about all areas of history, so there is bound to be something that floats your boat. History Hit also addresses current affairs with a historical view; the most recent episode talks about the use of concentration camps and internment and asks the question ‘should we be worried?’ I like to think that if you are the kind of person who has read this far into an article about history on a blog written by a weirdo like me, you will agree with me that the answer to that question is ‘Yes, we should and I’m fucking terrified.’

Dan currently produces many other cool things that are so far removed from Mrs Cuthill reeling off dates in monotone that I can honestly say, if your history teacher bored the love of history out of you, you just need a new teacher. Check out NEON which unpacks modern culture from a historical angle. They have even done an episode on Love Island if you are watching that… I don’t watch reality TV… except Ru Paul’s Drag Race. 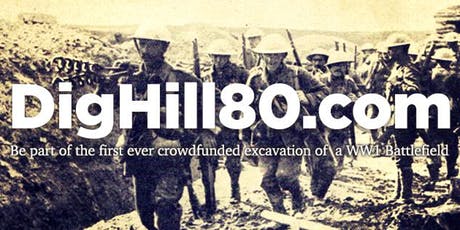 Dan’s most recent project is Dig Hill 80, a Crowdfunded excavation of a WW1 fortress in Belgium. To hear Dan talk about this project is really inspiring; essentially, this group of volunteers and enthusiasts are excavating a piece of history (alongside the archaeologists and historians of course).  Dan says, “It’s a beautiful project as we have so many different nationalities working together.” The volunteers are from many different countries and many of their ancestors (and possibly relatives) would have been on opposing sides in this conflict. Just another example of how knowing the violence of the past can foster the desire for unity in the future. If you fancy getting involved and going out to dig on the site, click here!

If any of this is resonating with you, come to HistFest with me. Let’s catch some really interesting talks and gossip over a cuppa or a glass of bubbly. Let’s talk about the amazing people of the past and, if you ARE into Love Island, let’s decide which historical hotties we’d like to partner up with. Me? I’d have to say it’s between Prince Rupert of the Rhine, and the 1st Duke of Buckingham (though I wouldn’t kick the 2nd Duke of Buckingham out of bed for farting).

Raising my glass to both Rebecca Rideal and Dan Morelle as they build upon the amazing thing that they have started – please do click here to sign up to the website or click here to follow HistFest on Twitter – let’s all get behind them and support them in this task and, my fellow nerds, I will see you in London this December.