OK, I’m not into sports. I make no secret of this and it’s been a truly liberating thing to admit.

I have a football team; this is purely tribal given that I was born into a family of supporters that include parents, grandparents, great-grandparents, my brother, cousins, and second-cousins. My baby pictures are of me wailing on a claret and blue blanket and Aston Villa have made me cry many times since!

But I do not enjoy watching football or sports on telly – there are so many other fantastic things to distract me. The most competitive show I watch is Ru Paul’s Drag Race.

So I wasn’t watching the Olympics from Rio.

A funny thing happened on Saturday night/Sunday morning though… Chris and I had been out dancing and arrived home after 1am, switching on the TV out of habit as we got ready for bed. As we crawled, sleepy, under the covers we became engrossed in the Men’s 5000m Final and cheered on Mo Farah.

Mo was already a national treasure, in that genuine sense of the word, but his performance in this race was truly inspirational. Starting steadily before leaving the pack behind, those little glimpses over his shoulder through gritted teeth as he pushed forward with every fibre of his being. He seemed to make it look both effortless and all-consuming at once.

As I switched off the lights to settle down to sleep, Mo’s inspirational post-race words stuck with me:

“It has been a long journey but if you dream of something, have ambitions and are willing to work hard then you can get your dreams.”

What better sentiment to share with you all as we embark on another wonderful week? 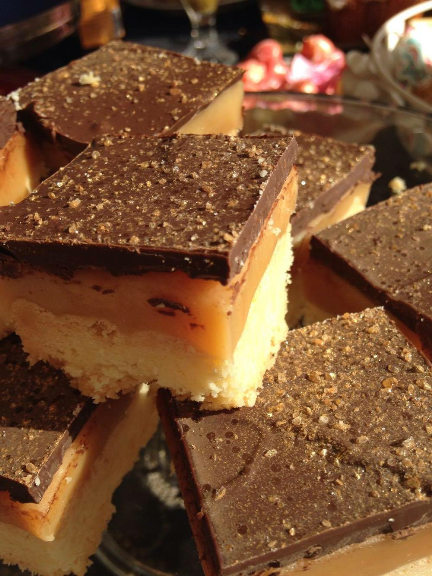 For Mo Farah, I would bake up a batch of my Salted Caramel Millionaire’s Shortbread, sparkling with my fancy gold salt to match his many gold medals. I’m under no illusions that Mo would eat this much sugar and salt but I would like to think that I could persuade him that they were ‘energy bars’ and get at least one down him.

What? You KNEW I was a feeder. I’ve seen more meat on a butcher’s pencil and elite athlete or not, I’ll feed you up! Congratulations (Sir) Mo and all of Team GB.