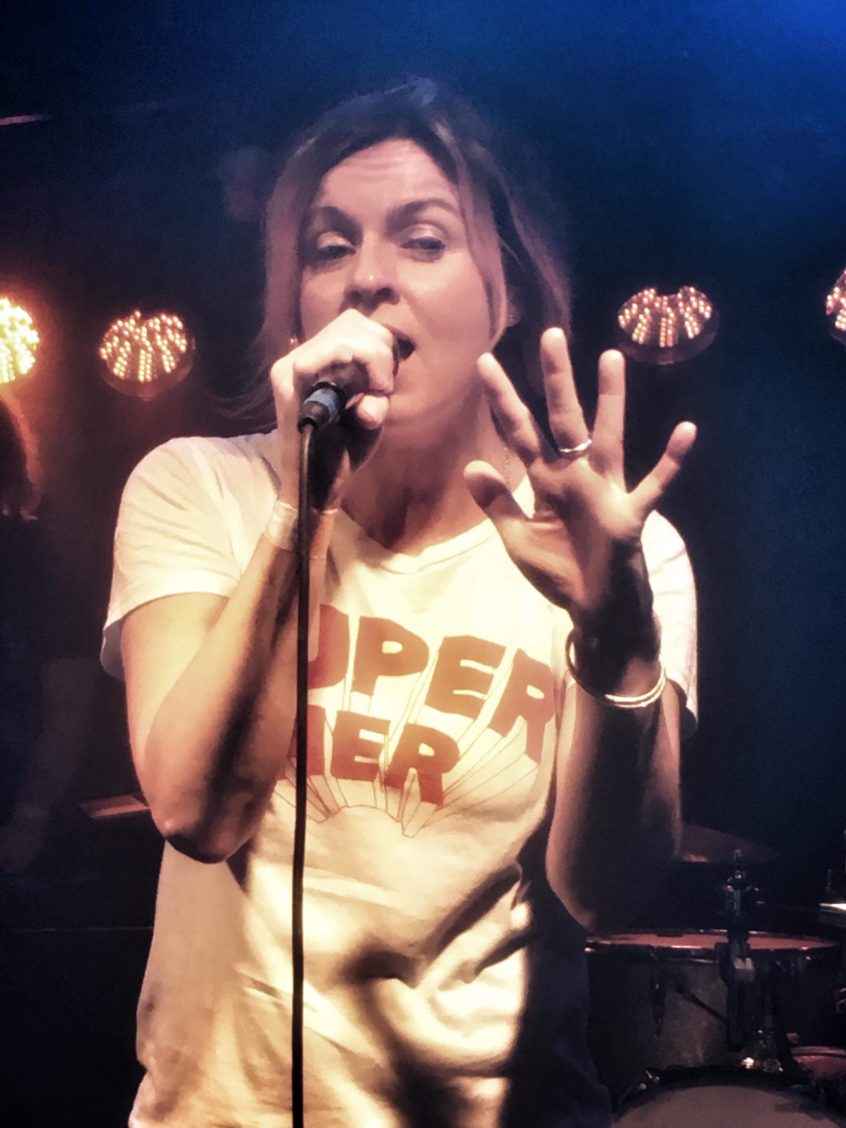 I can distinctly remember the moment that it started; it was a Sunday evening and my family had just returned home from a visit to the Grandparents. As we opened the front door, a clear cassette tape lay waiting for me inside. I cannot recall if there was a note but I knew that this had been posted through the letterbox for me by my friend Paul-Simon AKA Geddes (his surname) AKA Phil (the result of a rude joke that stuck).

I played the tape immediately and the music sounded like nothing I had heard before. The next morning on the school bus, I thanked Paul-Simon for the tape with these exact words, burned forever into my memory; It’s really cool. Is it Nirvana? This being the coolest band that I was aware of but hadn’t listened to.

The year was 1994, I was 12 years old, the album on that cassette was Definitely Maybe by Oasis.

You can laugh at the transatlantic faux pas, you can scoff at the child brought up on The Beatles not catching the derivative chord structures, you can roll your eyes at the bloated egos and everything that we perhaps think of when we think of Oasis in 2018, but you should not underestimate how that cassette tape made me feel at that moment in time and how it was to open up into a movement that was to soundtrack my formative years.

It was called Britpop.

The next few years were a golden age of British music and culture, before Noel Gallagher walked into 10 Downing Street and Tom Jones released his Reload album – both nails in the coffin of the last of the analogue music scenes. This was the last time I would obsess over music through Top of the Pops, songs recorded off the radio, my Walkman, music magazines, and shared clear cassette tapes.

Roll call, please. Stand when your name is called… obviously we had the poster boys, Oasis and Blur, the almighty Pulp (I spent out all my pocket money on Different Class the week it came out, aged 13 I did not understand the sex that permeated that record, but I knew I liked it!), Supergrass, The Bluetones, Kula Shaker (I don’t care, I loved them and still do, the posh boys of Britpop), Menswear, Gene, Ash, Ocean Colour Scene, Space, Mansun, The Longpigs, The Lightening Seeds, and more that I will kick myself for not listing.

The best thing about the scene was the number of amazing female fronted bands. They were singing to me about things that I had either experienced or imagined that maybe someday I would. Echobelly, Elastica, Garbage, Lush, Kenickie, and Sleeper. The women in these bands were the epitome of cool to me, they rocked just as hard as the boys and partied just as hard too – before that awful term ‘ladette’ was coined and if Zoe Ball wanted to get pissed, it was splashed all over the papers as if it was the end of days. The Daily Mail had a fucking ball.

I wanted so much to be like the women of Britpop that I spent my pocket money on little Fred Perry rip-off polo shirts from New Look and decided to chop off my long blonde locks into an elfin crop. Presenting my Mother with a picture of Louise Wener from Sleeper and asking to get my hair cut exactly like hers I was shot down swiftly with a no, because ‘if you cut your hair, you’ll never play Juliet!’ The pitfalls of growing up with a Shakespeare-loving thespian Mother were few and far between but this stance did not change. I think a compromise was struck when I was permitted to get a ‘Rachel’ a little while later (if you remember the 90s, you remember the Rachel). Kimberley Thorne’s Mum let her get her hair cut like Natalie Imbruglia a few years later and I was so jealous.

This drama aside, my memories of this time are sunny and bright, the music constantly playing, my school bag weighed down by cassettes and copies of the NME, Select, Melody Maker, and Q magazines that I read from cover to cover before cutting out pictures of my idols and plastering them on my bedroom walls and exercise books. It felt like an overwhelmingly positive and uniquely British movement as we all laughed at Jarvis Cocker wafting his bum at Michael Jackson on The Brits and I didn’t get Mrs Merton’s joke about everyone backstage asking for Charlie and assumed that my idols all just wanted to hang out with me.

On Friday, I had the perfect opportunity to say thank you to one of my Britpop idols in the best way that I know how… with baked goods. The only ‘livener’ in my brownies being the rum in the raisins and a tonne of sugar! It’s not every day that you get to bake for one of your heroes, so I cracked out the rum.

Sleeper were coming to Bedford Esquires, my beloved local independent gig venue and my ticket had been bought as soon as they were released. The gig was sold out and my place was staked right down the front to dance and sing along. You can see me if you zoom in… 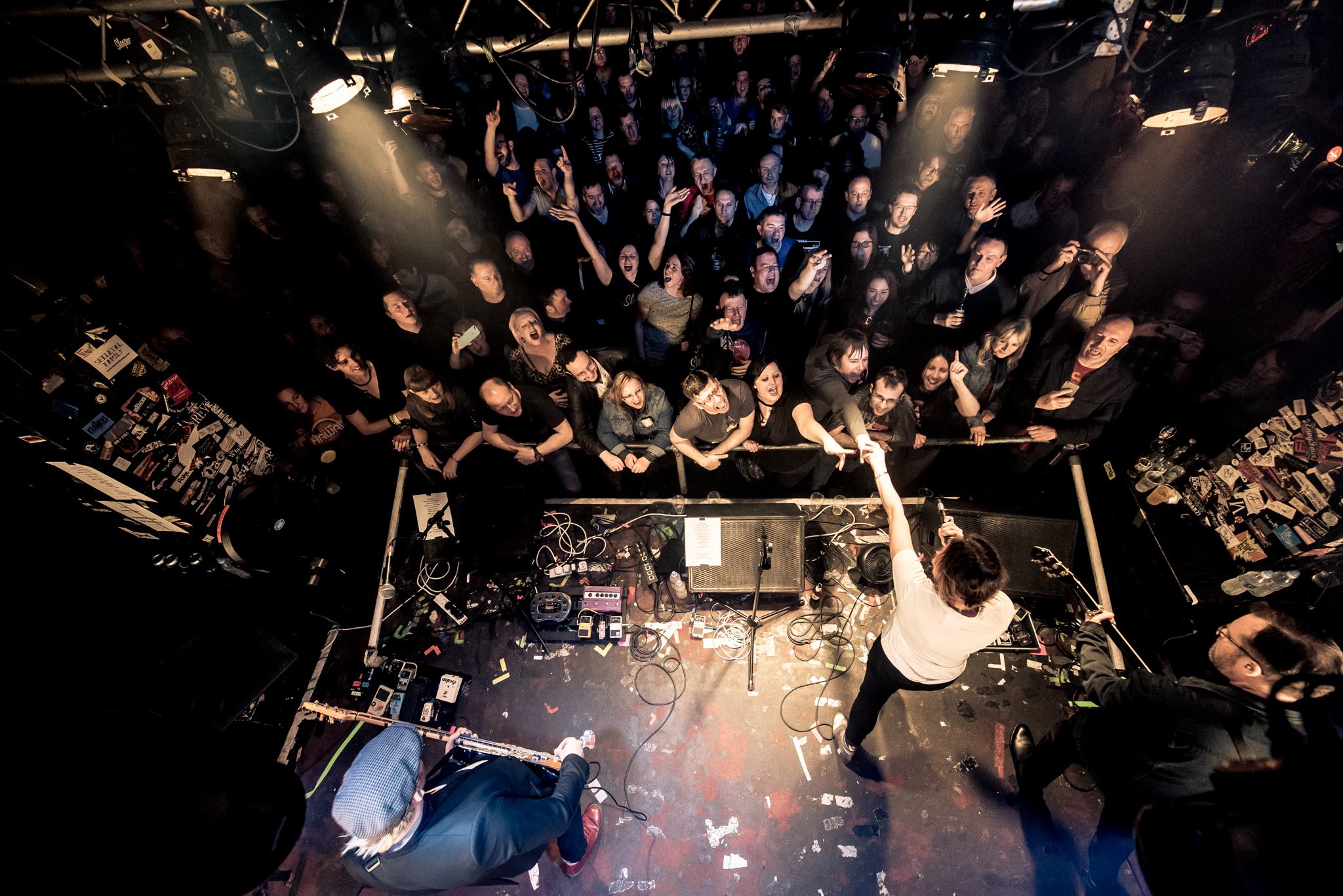 The gig was fantastic. Sleeper are still as tight as when I watched them at home on Top of the Pops.

None of the magic has been lost. Louise still does that adorable doe-eyed blink as she sings and I’m fairly certain that she has a portrait in the attic somewhere. The only difference is that I understand her lyrics a little more now. I don’t think  that I ever appreciated how cleverly crafted they are. 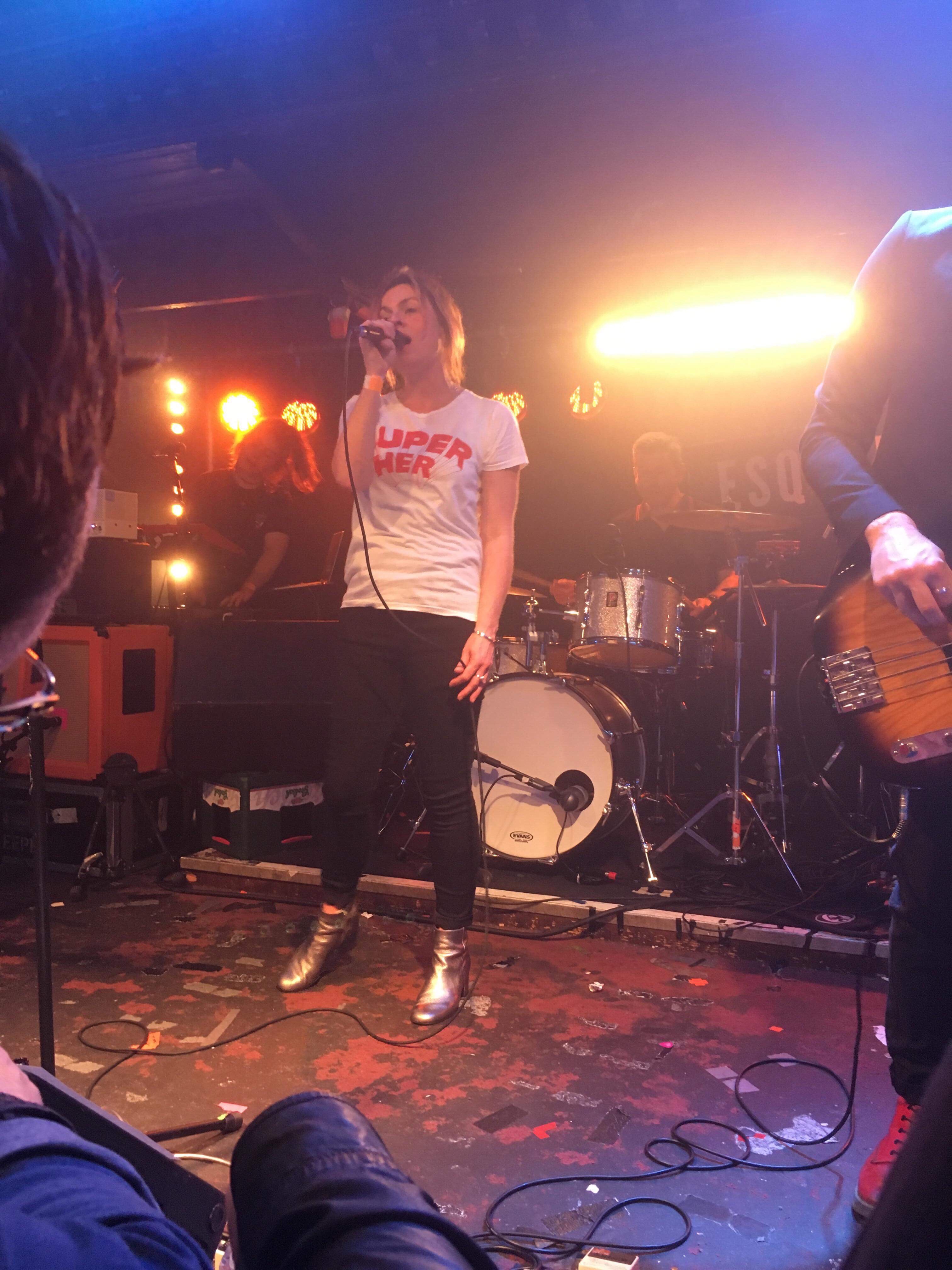 For these Britpop legends, I baked my Cacao Brownies, loaded with rum-soaked California Raisins. If you fancy whipping up a batch of these at home, it is as simple as soaking 200g of California Raisins in 60ml of Dark Rum for 24 hours before adding these to the Cacao Brownies mix (click here for the recipe). I topped mine with pink sugar and tiny red lip sprinkles. 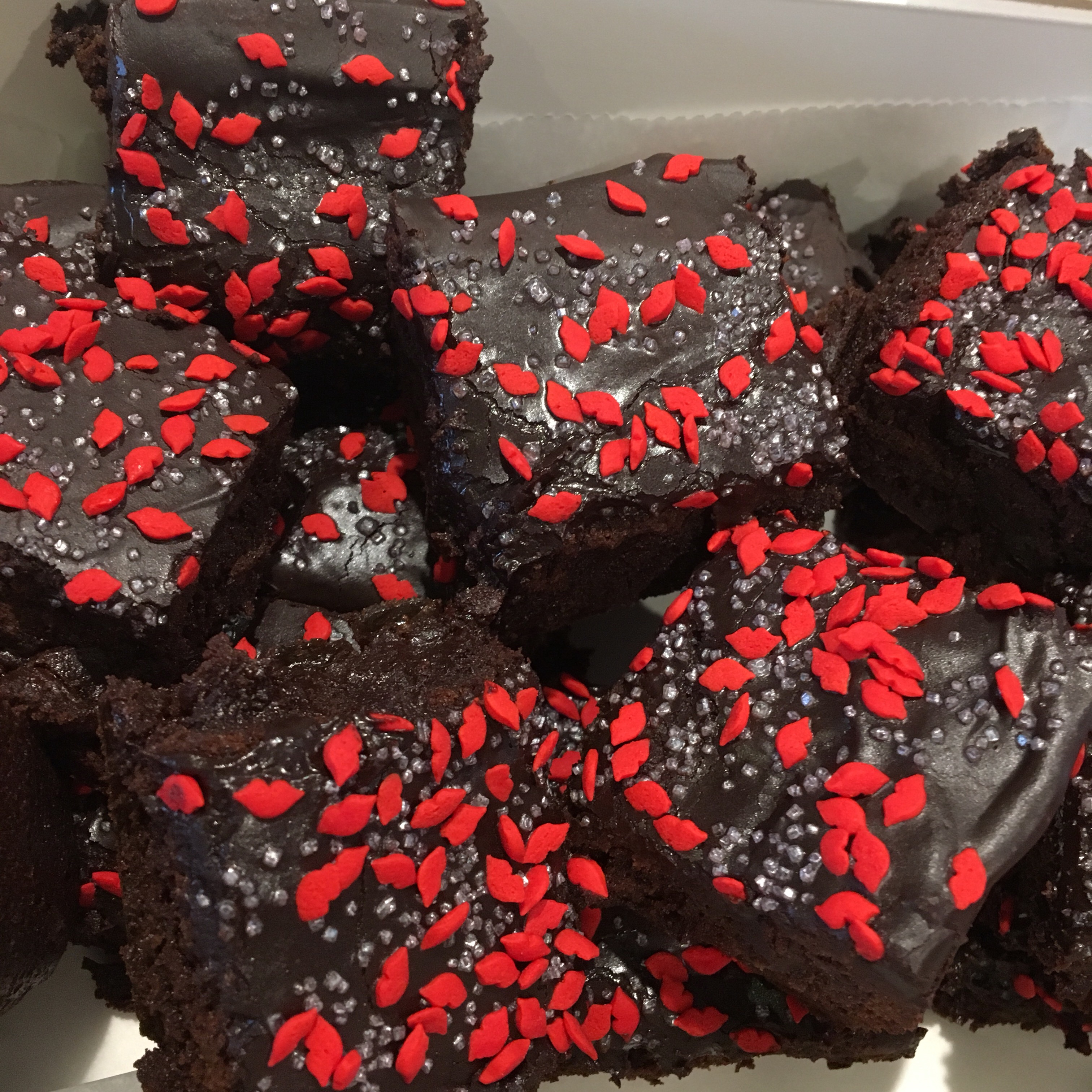 The resulting Brownies were fudgey as hell and oh-so delicious. I boxed the offering up with a little nod to Sleeper’s song Delicious. 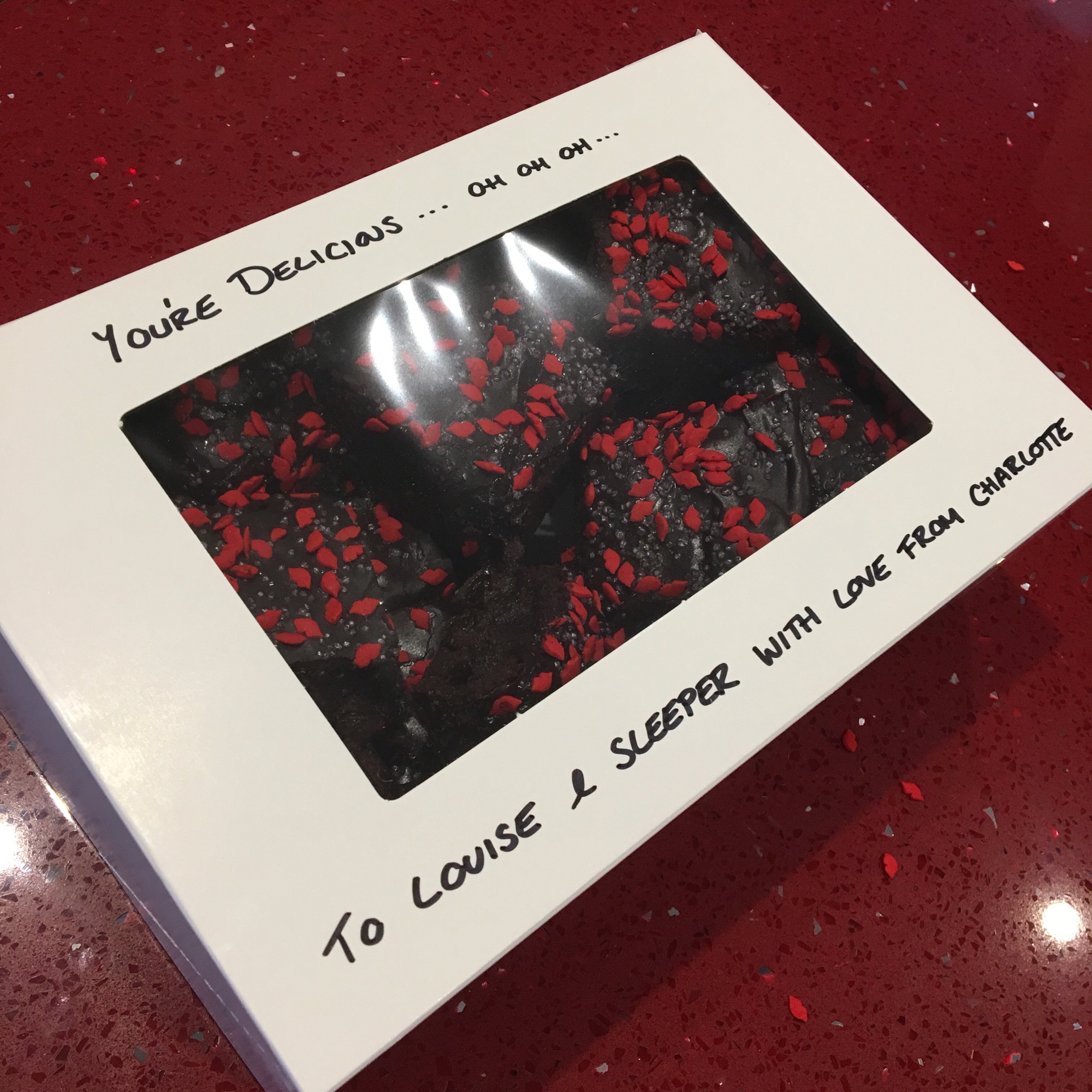 Because I cannot shove a brownie through the screen to you, here’s a treat for you, right here…

I checked in with Gareth Barber at Esquires, just to let him know that I’d baked brownies for the band. When he asked me if they were vegan, I popped back into the kitchen to make a few of my Vegan Dairy-Free Chocolate Cupcakes too. I don’t like to leave anyone out if at all possible! 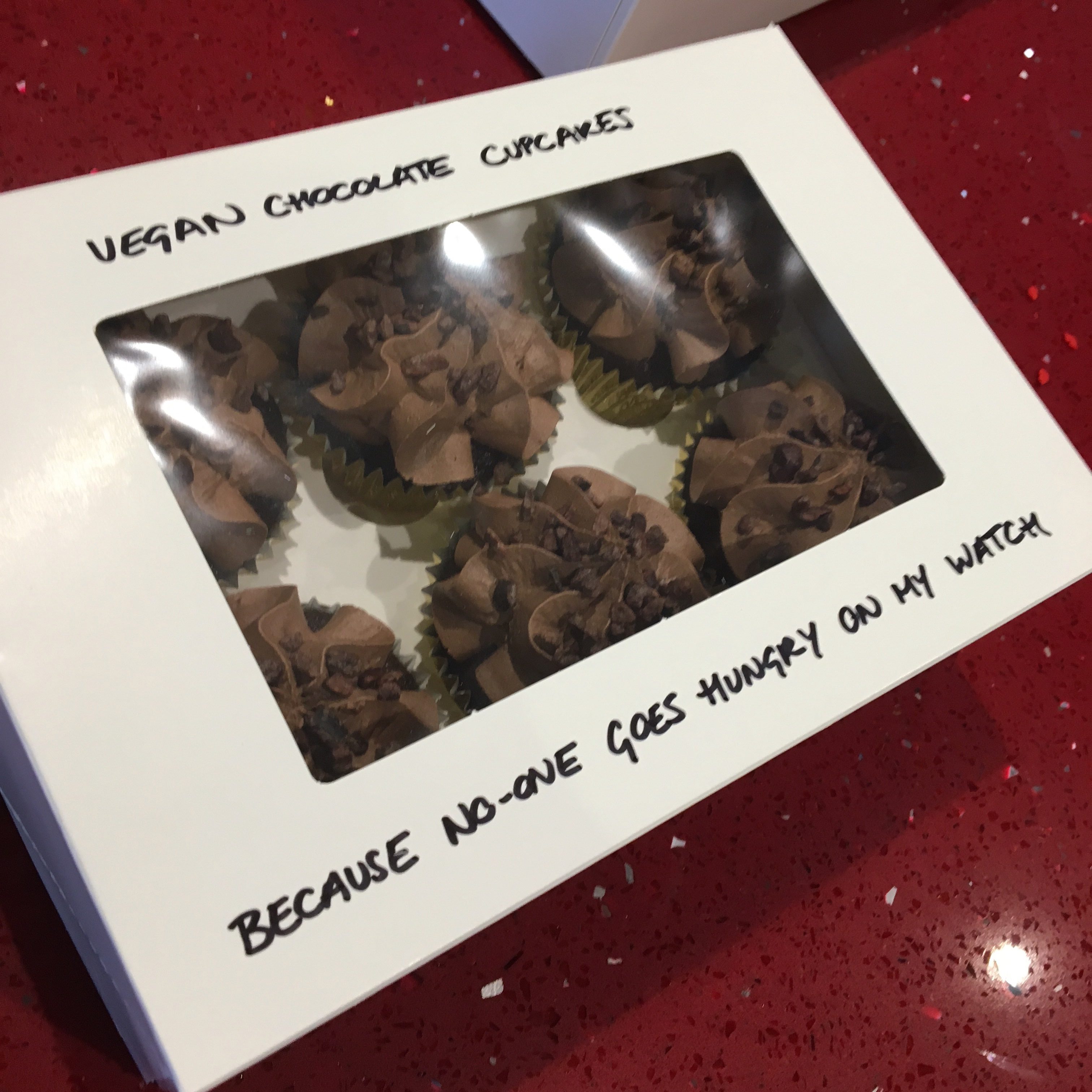 They say that you should never meet your heroes but I do rather relish the chance to thank mine! Of course, on meeting the lovely Louise, I immediately regressed to that teenage kid and babbled like an idiot. Thankfully, Louise was kind and chatted to me like a normal person!

Having strong women to look up to – be they Britpop icons, or thespian Mothers – gave me a great start. They showed me that life was for the living and that I could be anything that I wanted to be. You didn’t have to be American to be cool, you could just as well be from a little village in Cambridgeshire and the world could be yours for the taking. You could even be female and front a rock band. Imagine. 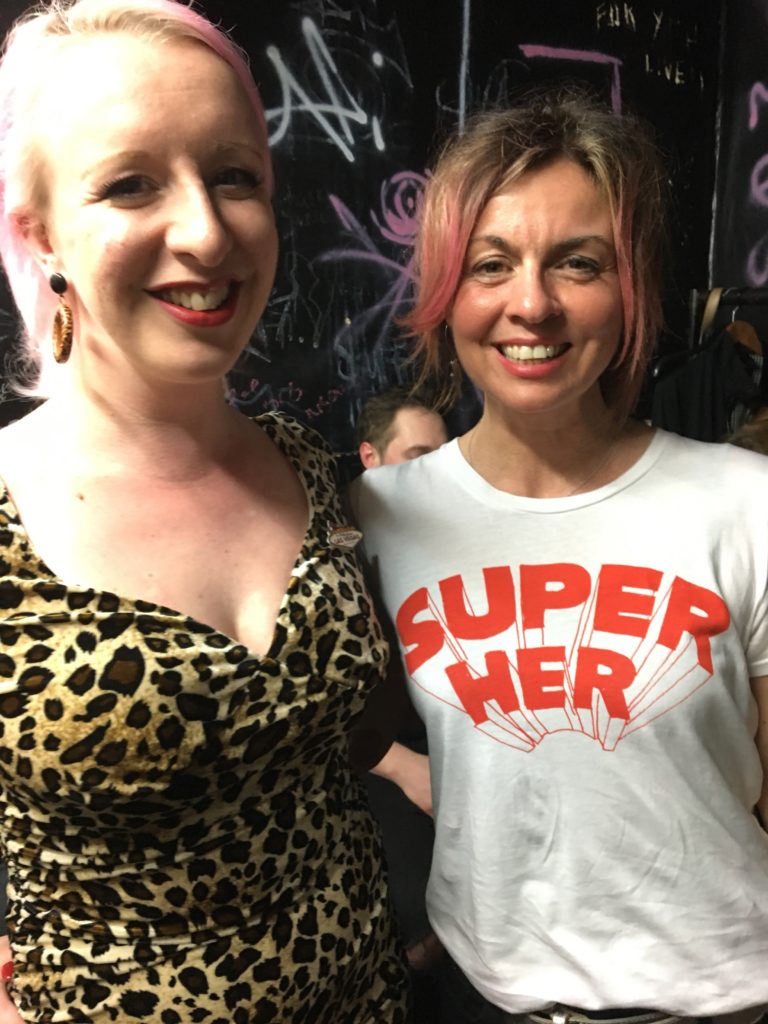 Louise was even kind enough to give me a shoutout from the stage and thank me for the brownies. I don’t think that I have ever had a shoutout in front of a full house! I’m still on cloud 9, such is the power of a thank you.

Thank you to Sleeper for being the soundtrack to my adolescence and extra special, gushing fangirl thanks to Louise Wener for being someone awesome to look up to.