It’s Monday and smack back to reality after the weekend. Well, not quite! My Monday mornings are dedicated to avoiding reality at all costs with my little flight of fantasy bakes. Last week I baked a cake for Groucho Marx and the week before for Nigella Lawson. Who needs reality?

Today, I would like to bake a cake for Fanny Cradock, though I am filled with dread and terror at the prospect. Fanny cut an imposing figure that is as formidable today as it ever was.

I often talk of my fascination with Fanny and just assume that you are all old enough to know who I am talking about. Why is this TV chef whose prime passed long before I was even born someone that I look to professionally and a point of reference in my work?

Fanny Cradock was one of the very first to cook on TV for entertainment. Her mission was to bring high-class cuisine to the housewives* of Great Britain in an era that had only just seen the end of rationing post-World War II. As someone who bakes elaborate celebration cakes several times a week, I cannot imagine living through rationing. I’m not an expert but a quick glance to the internet for research tells me that the average family ration was just 227g sugar per week by the end of the war and this lasted until September 1953 – have a little look at the recipes on my Recipe page and see how you think I would have done!

It was not just that these housewives would not have had the ingredients to work with, they would have been unlikely to have had any more inspiration than what they had been taught as girls – fine continental cuisine was just not available to very many. Olive Oil was something that you got from the chemist to pour into blocked ears. Escoffier was certainly not a name spoken over many dinner tables up and down this country.

Whether she was turning hard-boiled eggs into swans (you’ll need a pipe cleaner for this one) or serving up the Christmas turkey replete with fanned feather tail, Fanny was a colourful inspiration to countless housewives and home cooks bringing elements of French cuisine and glamour to the table – famously stating that all cuisine was French and that the British had no real cuisine of their own.

I compare myself to Fanny with a certain amount of pride. Like Fanny, I like to dress up for the kitchen! Though I have yet to emerge on stage at a food festival in a ballgown, as Fanny did whilst cooking Christmas dinner on stage at The Royal Albert Hall…

… it remains a personal ambition. Fanny never wore an apron because “cooking is a cleanly art, not a grubby chore.” I couldn’t agree more!

Fanny was famously fierce and enjoyed a good twenty years in the public eye on television before she fell from fashion. What would I dare to bake for her? Whilst I like to think that my Chocolate Mud Cake would blow her mind, I know that she would find the size of our modern cake layers incredibly vulgar – my own style of baking coming much more from American bakery than delicate French patisserie. I am 99% sure that she would make me cry.

If you would like to delve more into the wonderful world of Fanny Cradock and her recipes, please visit the incredible Keep Calm and Fanny On, in which my dear friend ‘Fanny’ works through a vast back catalogue of recipes. You may even spy a familiar face in a special 200th blog post article! 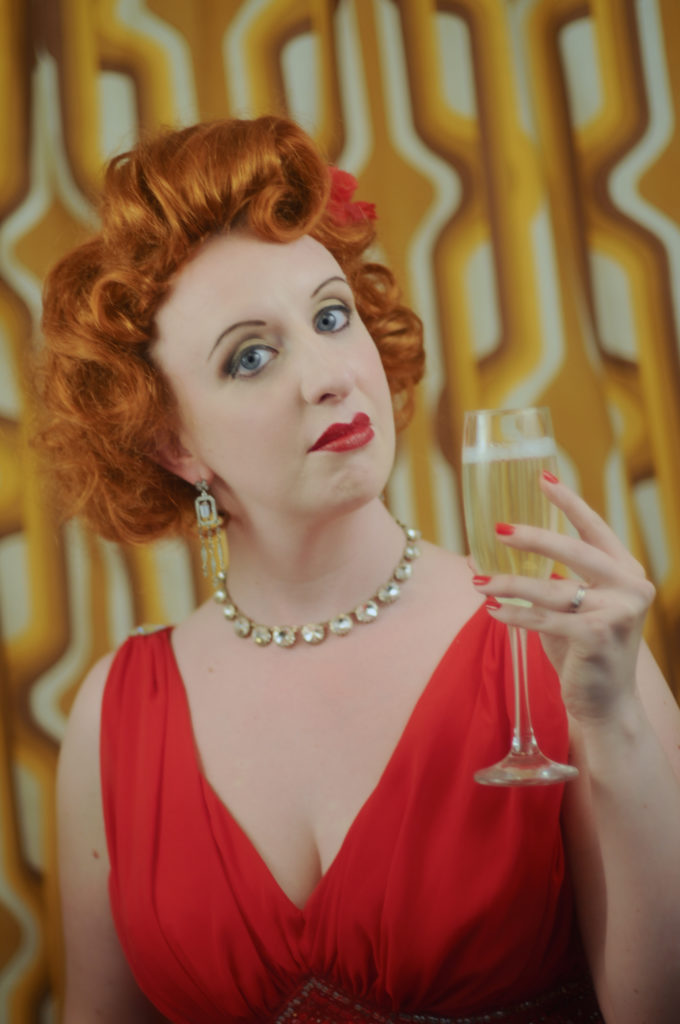 Have a Fannytastic week and stay gorgeous!

*I use the term ‘housewife’ without even a degree of irony. The times that I am referring to here are generations removed from where we are now – my Granddad never cooked a meal in his life, he wasn’t a male chauvinist or an evil oppressor (far from it, he was the kindest and sweetest) but that was just Nana’s job and she wouldn’t have had it any differently. Right or wrong, better or worse, that’s just how things were.