On Saturday, Chris and I visited a 1940s event in the town of Newport Pagnell. This small Buckinghamshire town really enters into the spirit of this new annual event, the high street shops taping up their windows and 1940s entertainment available in most of the town’s pubs and hotels.

It was a great excuse to get dressed up. I wore this white brushed cotton dress with one of my favourite hats. 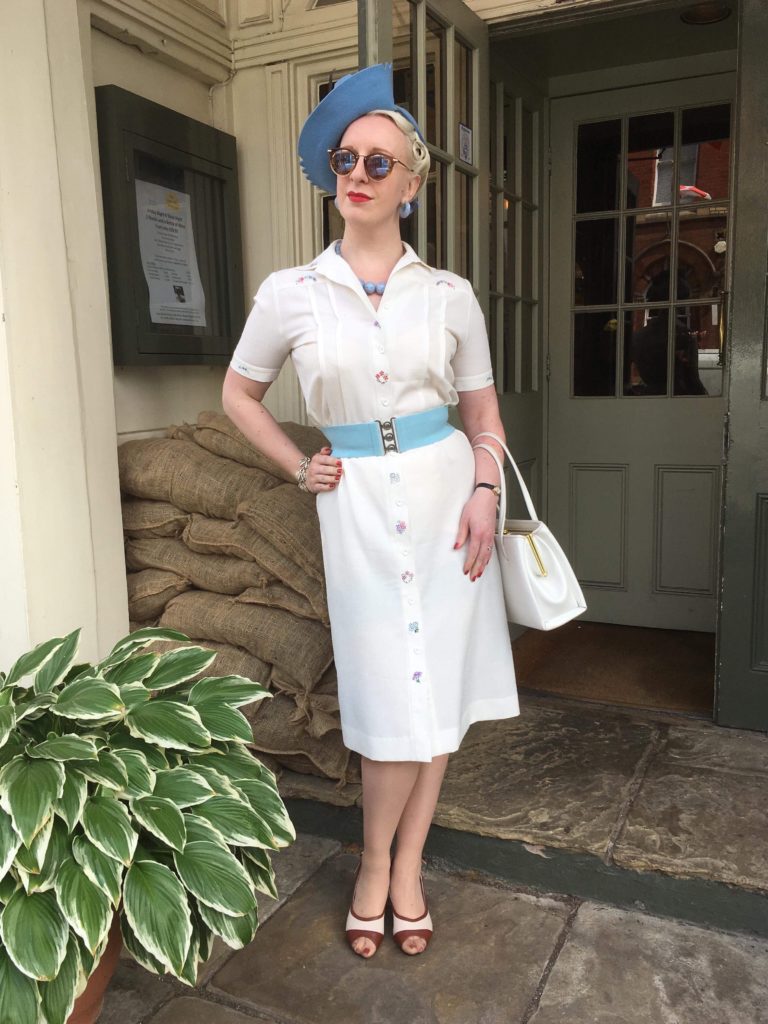 Though a personal highlight for me was meeting this wonderful gentleman, dressed as a hero of mine, Groucho Marx. 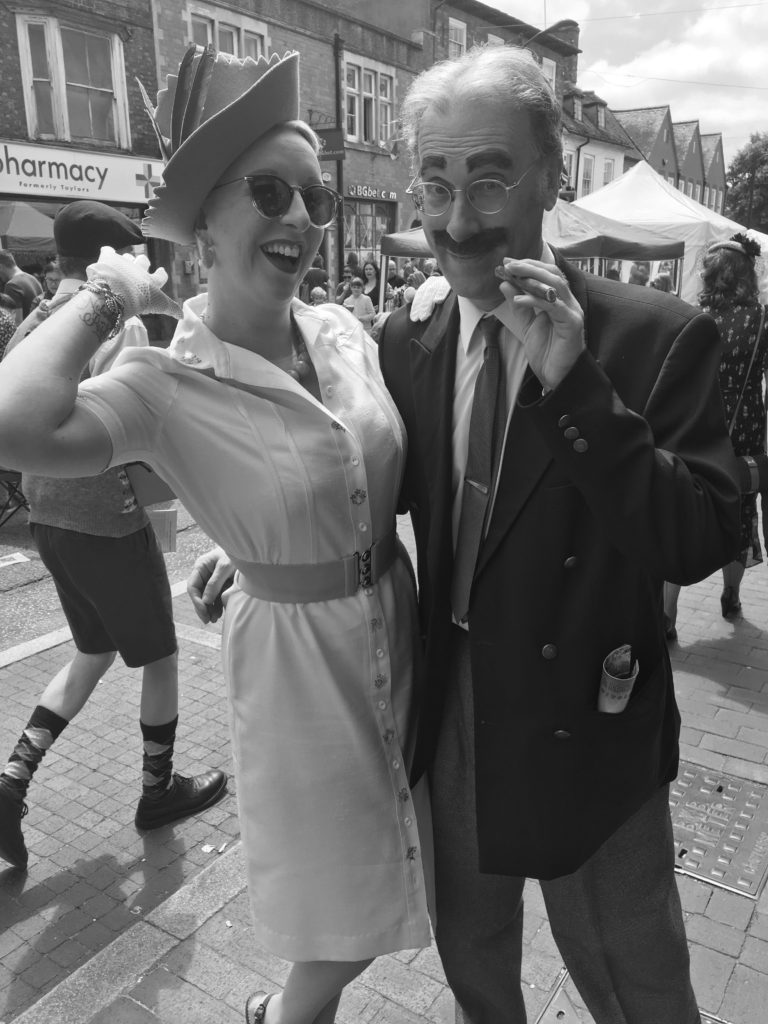 I’ve written about Groucho Marx before – in fact, I think he may have been one of my very first fantasy Monday bakes (click here to read that post) – as I have been a fan of The Marx Bros ever since I can remember. My Dad has also been a lifelong fan so I was raised on these movies. Meeting this gentleman left me a little starstruck, so much so that I didn’t even get his real name. To me, for those few minutes, he was Groucho.

We chatted about The Marx Brothers and the various legends that we have heard about them – my favourite of which being the origins of Chico Marx’ comedy Italian accent coming from childhood necessity, fooling the neighbourhood kids into believing him to be Italian rather than Jewish to could avoid being bullied. If you’ve never heard Chico Marx’ Italian accent, you may not appreciate how unlikely it was to fool anyone!

Returning home on Saturday evening, it had to be a Marx Bros movie and I chose A Day at the Races (Sam Wood, 1937). This screwball comedy cast Groucho as a horse doctor posing as a human doctor to try to save a sanitarium – that’s a word we don’t use much any more! Let’s call it a private clinic. As in most Marx Bros movies, the plot is there and does make sense but its purpose is only ever to serve as a vehicle for Groucho’s wise cracks, the banter between Groucho and Chico, Harpo’s silent comedy, strange musical interludes (always involving Chico’s nimble-fingered piano playing and Harpo’s almost unsettlingly beautiful harp, but at this stage in their career at MGM there were also big production musical numbers often shoehorning in a star that the studio wanted to promote – in this case, classical dancer Vivien Fay).

Another recurring character in these movies is the blonde. She is always trouble, sent to distract our heroes and very often actively working with the bad guy.

As I watched one such blonde (played by Esther Muir) playing up to Groucho’s comedic seduction in A Day at the Races, I realised something; these women may well have been the inspiration for my love of vintage styling!

They were always so glamorous! Yes, they were trouble but I still cannot tear my eyes from them when they are on screen. I scrutinise the hair, I dream of the dresses, they are divine!

I always loved The Big Store (Charles Reisner, 1941) as a child and one of my favourite moments involves a Marx Bros blonde (played by Marion Martin) demanding a fabric to match her dress to cover her hat (life goals). The punchline comes when, after berating the store assistant for not having the correct fabric, Harpo cuts a large section of fabric from the back of her dress and hands it to her. The blonde is pleased that the fabric has been found and flounces away with the back of her legs on show.

All I could see was this beautiful woman. I adore everything about her look and dream of those shoes with alarming regularity.

Some of these wonderful performers were studio bit-part players, largely forgotten so many years later. Some are a little more enduring such as Thelma Todd who, despite perhaps being more famous for her death in suspicious circumstances at the age of only 29, appeared in some 120 films. I’m not making this up; Thelma Todd made around 120 films in a 9 year career between 1926 and 1935. That was the industry back then.

As the ‘college widow’ in Horsefeathers (Norman McLeod, 1932), Thelma was cast as the older woman who seduces younger college guys. She floats around the screen in chiffon and a young Zeppo Marx feeds her toast whilst singing Everyone Says I Love You to her. I still think that this is one of the most romantic things I have ever seen.

I’ve often credited Marilyn Monroe with being the origin of my styling choices but one of Marilyn’s first roles was as the girl to be chased by Groucho Marx in Love Happy (David Miller, 1949). It’s not one of their best but there she is, my style idol.

I’m almost so attached to The Marx Bros and so indoctrinated into their humour that I cannot tell you without bias that these films are good and that they need watching. You may well take my advice and never forgive me! What I can tell you with absolute certainty is that these films need to be seen to be believed; they are anarchic to the extreme, and though some jokes and references are topical and unfathomable without a quick google search, most of the jokes still land and are still in use today. The influence of The Marx Bros is undeniable – especially on Woody Allen, whose early comedies are pure Marxism.

Today I would love to bake a cake for all of the Marx Bros blondes. I would love to sit and talk to them about their experiences of working in those early days of Hollywood – I suspect that they would have more than one story for the #metoo campaign and that their stories would be as horrific as they were undeniably glamorous.

For all the Hollywood blondes, be they icons or more of a niche interest, I have a slice of cake and a glass of something bubbly from this little girl who has spent a lifetime (a longer lifetime than some of your own) looking at you adoringly and emulating your styles. I won’t have been the first and I doubt very much that I will be the last.

If you would like to hear more about famous Hollywood blondes including Thelma Todd and Marilyn Monroe, click here to visit the archives of the wonderful You Must Remember This podcast who ran an entire series entitled Dead Blondes. Well worth a listen.