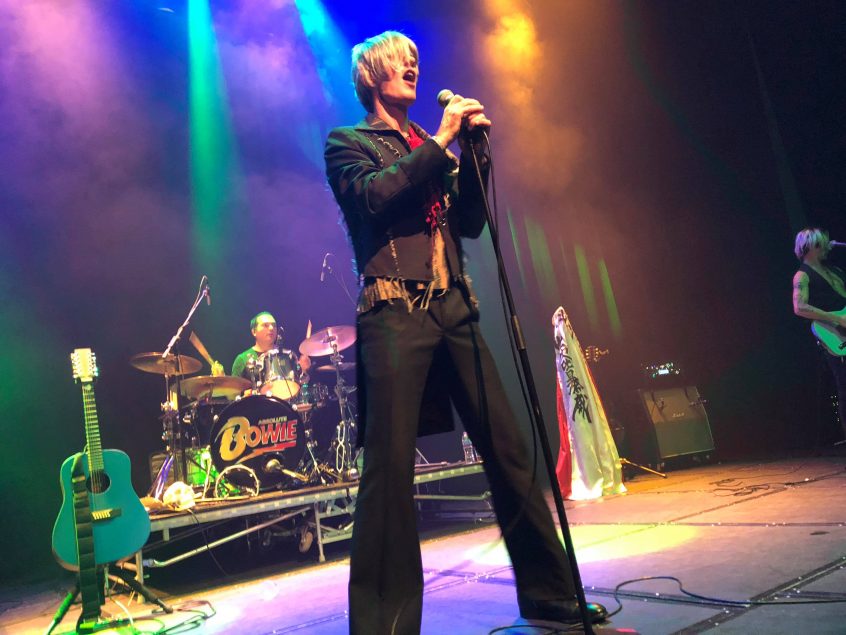 This can be partly explained by his death – an event that I am still able in many ways to pretend never happened – and partly by a feeling of complete inadequacy. Far clevererer (that additional ‘er’ was intentional…) folks than I have written at greater length and studied for much longer so who am I to throw my ill-considered thoughts into the public domain?

Whether or not this feeling is warranted, this is just how it is. I have never written a Monday blog post dedicated to David Bowie and I never will. I never met my hero and, bizarrely, I didn’t want to. He was magic to me and I don’t think I ever wanted him to be human. I never wanted to humanise him as he was not just some bloke called David. I certainly never wanted him to be mortal. 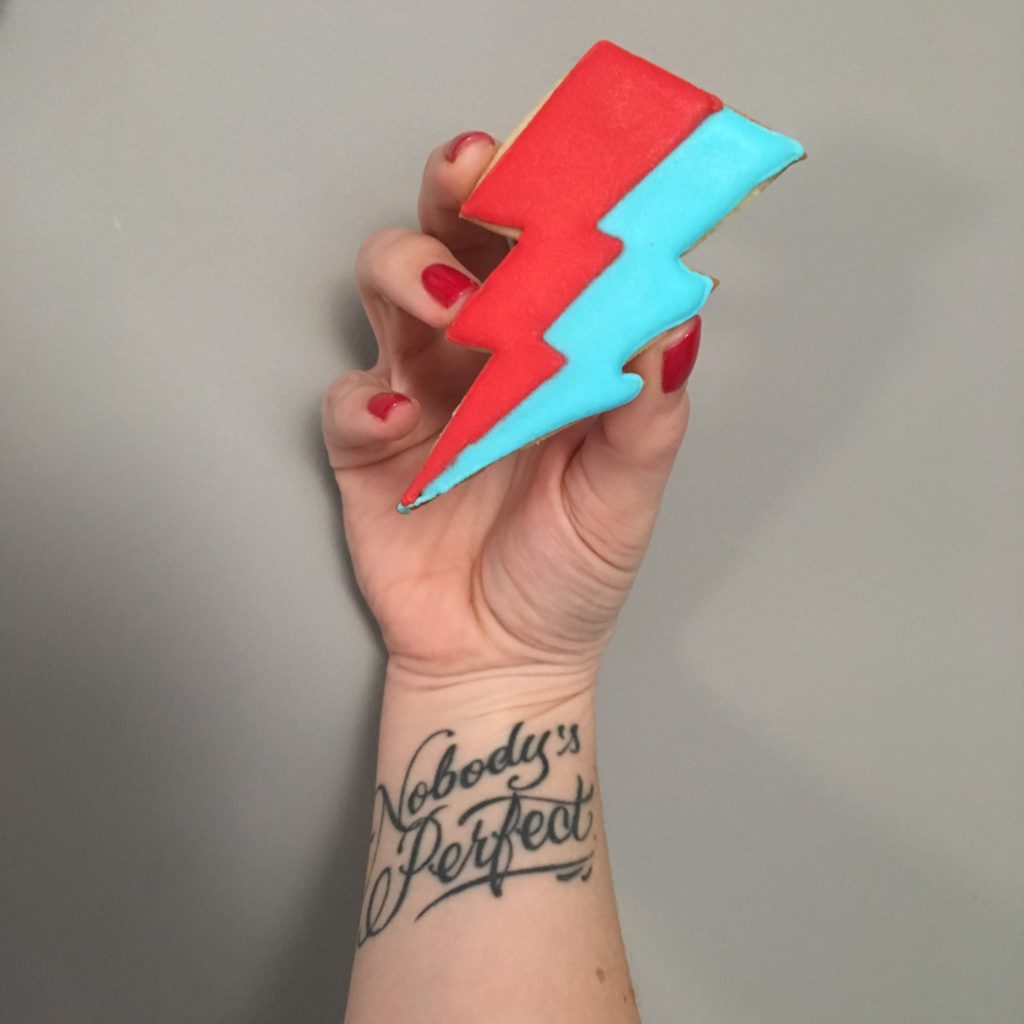 I have been thinking about fandom and what it means to be a fan a great deal over the past few days. On Saturday night, I went to see Absolute Bowie with my dear friend in life and the appreciation of David Bowie, Victoria. It would be more accurate to say that I went to see Absolute Bowie AGAIN because I have now lost track of the number of times that I have been to see this excellent tribute band. 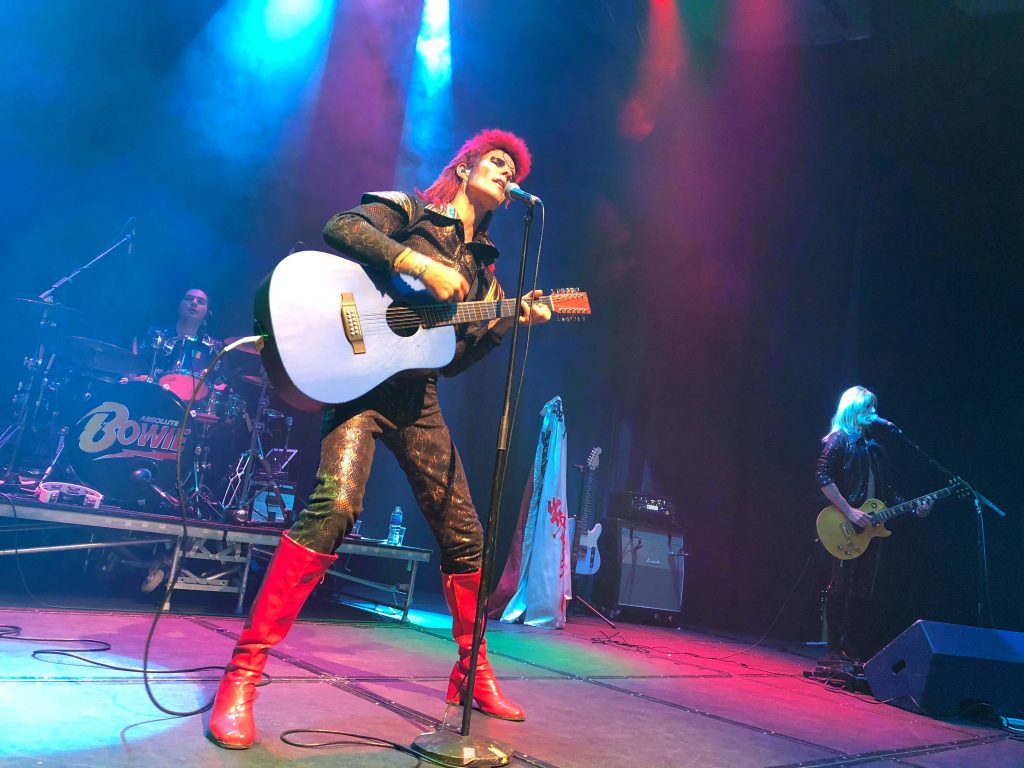 At this point, I can feel several of my Bowie friends rolling their eyes – I know who you are and I can feel you doing it (love you) – because there are many fans for whom the very notion of a tribute band is sacrilege.

Good tribute bands are a very good thing for a number of reasons; firstly, bands don’t always tour so sometimes can be harder to see. A good tribute band brings the live music to the fans.

In the case of David Bowie, we are now talking about an artist who will never perform live again. It physically hurt me to type that. I still would not put it past him to shock us all.

Looking around the audience at the Absolute Bowie show, I was heartened to see a kid of around 9-10 years old (I don’t have kids so, unless they are wearing a badge, I have no idea how old they are to look at them… if they’re not smoking I just assume they are around 10) stood in the front row. Bowie may be gone but the fans are going to keep finding the music and the experience of seeing live music is so incredible – it does not seem fair to just tell them that they were born too late. 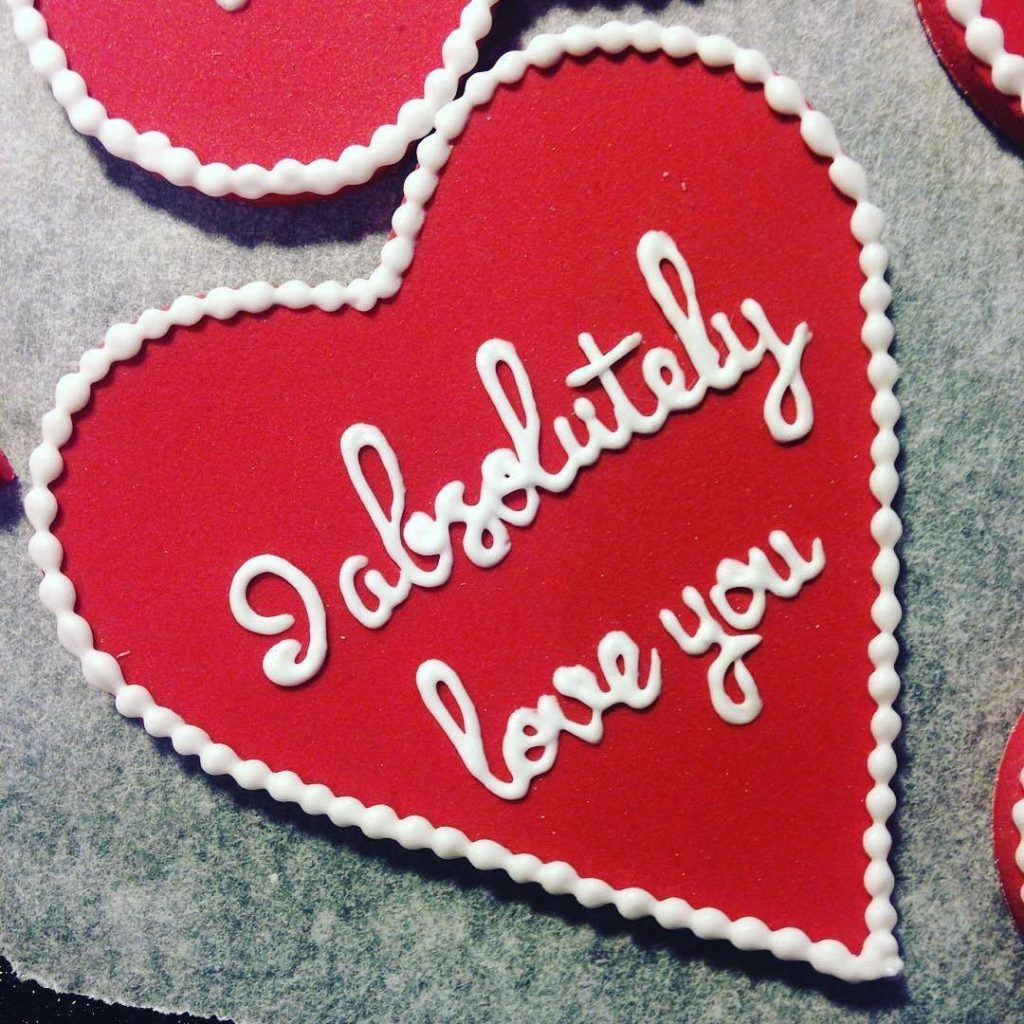 This is something I feel very keenly because I was born in 1982 – or Let’s Dance if we are taking the system of denoting our age by the Bowie album that came out when we did – so I missed out on loads of live shows. There were some amazing performances that happened before I could be bothered to be born and then loads more that happened whilst I was growing up. I discovered the music of David Bowie at 17 – so that’s 1999 0r Hours for the Bowiephiles – and did not get the opportunity to see him play live until I was at university in 2003 (Reality). I count myself so bloody lucky for that one show. He played something like 25 songs with such energy. My seats were a bit crappy and those were the days when Wembley Arena still smelled a little like piss but it was incredible. I remember so little about it except being blown away by him skipping across the stage and forgetting to breathe when he sang Under Pressure with Gail Ann Dorsey (total girl crush bass player for girls who play bass). Sometimes I push my brain to remember more but I’ve got nothing.

The reason I feel so lucky to have had this slightly sticky (Wembley was a bit sticky too, wasn’t it?) opportunity to see David Bowie was that THIS WAS IT. That’s your lot. Later on this tour, David Bowie was taken ill and did not tour again.

I feel even more lucky because my dear friend Victoria – read back, you’ll remember that we are at the Absolute Bowie show together – had tickets for a later show in this tour and it was one of the ones that was cancelled. Victoria never saw him and she is one of the most dedicated Bowie fans that I know. 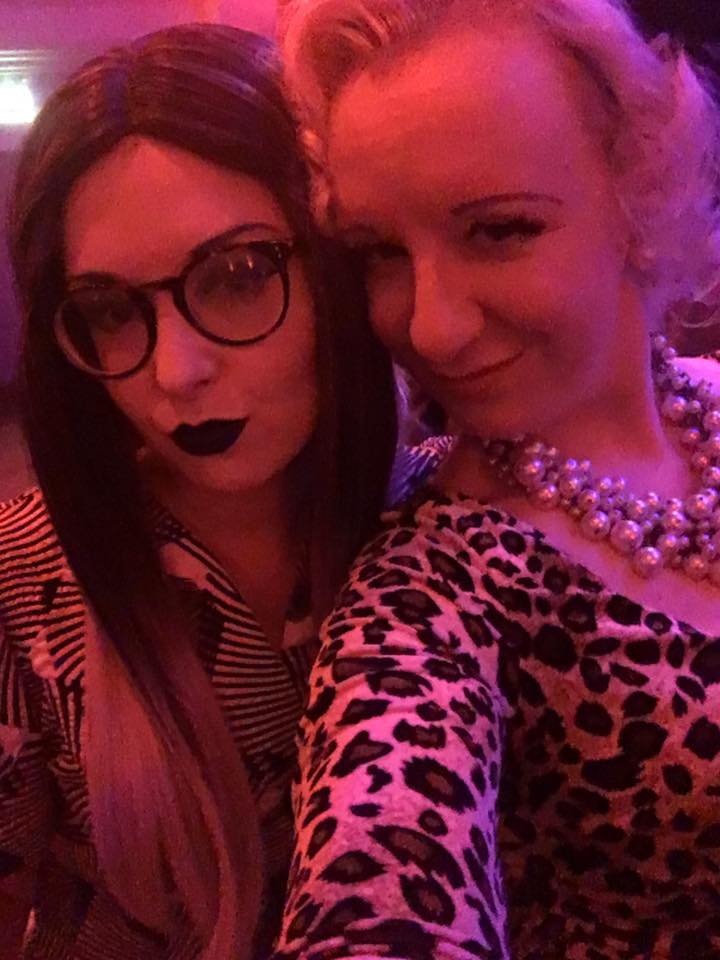 Does never seeing Bowie live make her less of a fan? No. It makes her unlucky. Often with fans there is a ‘where were you when’ and my response always has to be that I would have been there if I could. If I could have birthed myself any sooner or been lucky enough to have been born to Bowiephile parents… Oh, small child at the Absolute Bowie show, how I envy you! I mean, that kid has probably only been a fan for a couple of years but how wonderful to think that he will be playing those records after I’ve shuffled off. Maybe he will play them to his kids and BOOM the circle of life and the music lives forever. 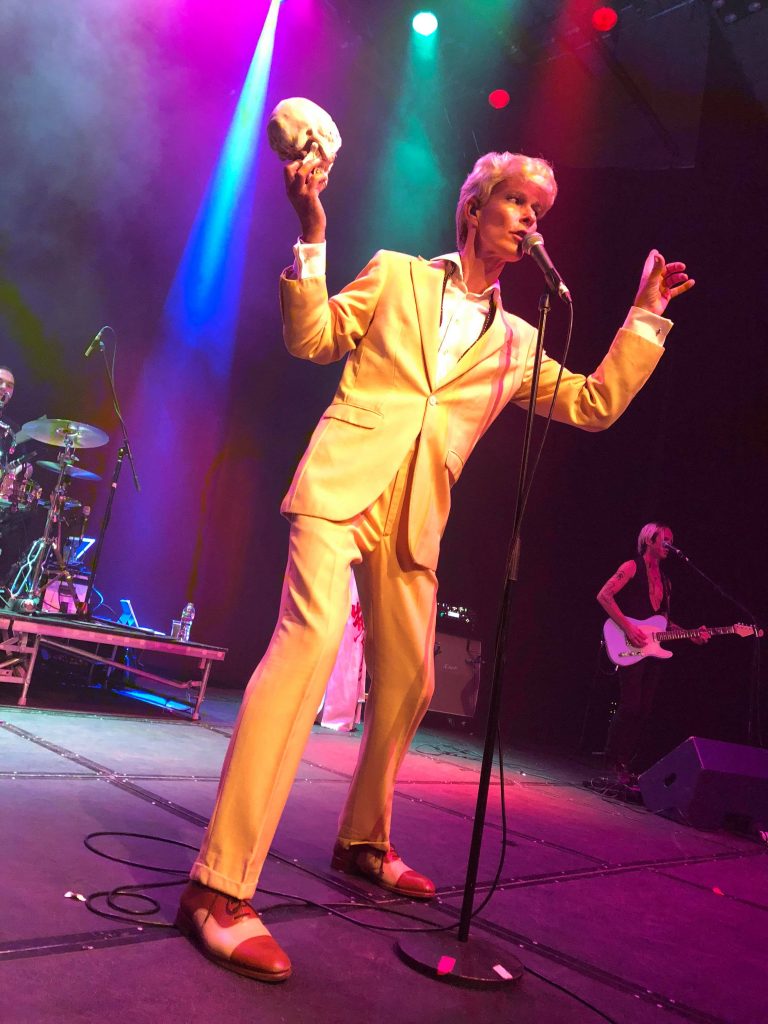 Herein lies the need for good tribute bands to bring the experience to those who missed out on it or just plain miss it. I have the utmost respect for tribute bands and I will tell you why; Bowie was just Bowie, every sound that came out of his mouth, every note he ever wrote, every lyric he ever penned. A good tribute band has to learn every word, every note, every inflection or face a lynching at the hands of the fans.

Trust me, if I saw someone doing a hatchet job on Bowie, I would do it myself. I am very protective of the music – a very famous Andrews Sisters style vocal trio put a Bowie cover version on their latest album and I wanted to scratch out my own eyes, scream, and throw the CD out of the car window. It was horrendous. I get really upset when people sing Bowie songs and forget the words.

Holy Holy are an amazing supergroup comprised of original Bowie alumni like the godlike genius that is Tony Visconti… I’ve seen them stop a song and start it again because it went wrong. I loved it! They are incredible. If they had been a tribute band they would not have got away with it. Just saying.

Absolute Bowie have it nailed. I find myself noticing details that I take for granted in the recordings – guitarist Chris Buratti recreated the wailing feedback from the opening section of Station to Station note for note and that’s no easy thing to achieve. My own act of devotion over the past (nearly) 20 years has been Bowie basslines. I started playing bass guitar at 13 (Outside) years old and once I fell in love with Bowie, I fell in love with the basslines and sat for hours in my room learning them note for note. I get an outlet for this once a year at Bedford Esquires’ Bowie Jam, where I have become something of the house bassist… whatever you want to play, I probably know it so long as you are playing in the same key as the recording! I digress. Cue bass face… 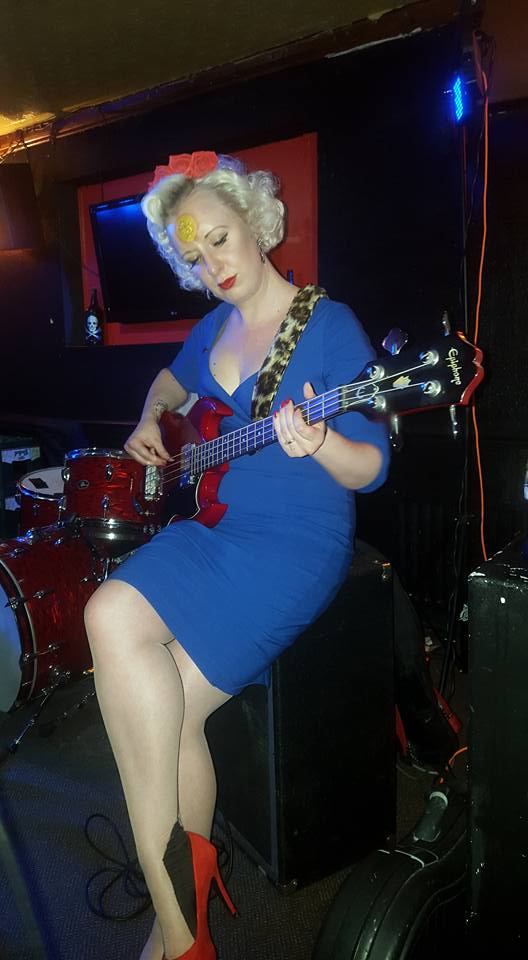 Every now and then, I catch a glimpse of Fabio Cascio playing bass with Absolute Bowie and try to pick up a clue on something I have been struggling to nail. I’m not ashamed to say that I am still learning all the time.

Yes, a good tribute band will nail every note but what makes a great tribute band is reverence to the source material. This is how I know that Absolute Bowie are a great tribute band; I saw them play on Saturday 16th January 2016 (Blackstar). We had booked tickets months in advance because it was Victoria’s birthday present. Victoria has the best birthday ever… 8th January, same as David Bowie. He died on 10th January. We were all in shock. We couldn’t decide whether we should see the band as planned or if it would be unbearable or in poor taste. Less than a week from the death of our hero, we picked ourselves up, put on our red shoes and went to the gig. 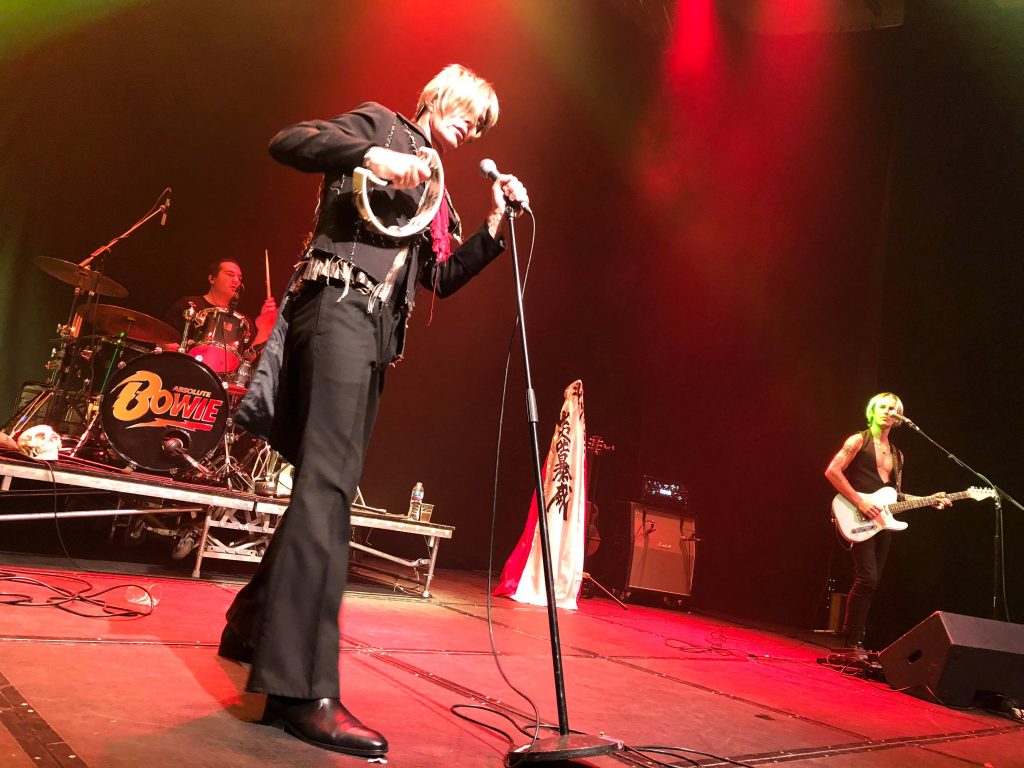 Absolute Bowie put on the most amazing show which was part celebration of a life and part group therapy. The audience cried openly during some numbers, singing along through the tears, fully acknowledging how ridiculous we must all have seemed to the outside world. Singer John O’Neill, the man with the impossible job of embodying Bowie in performance, led the tributes as he does in every performance. I get the sense that there were broken hearts on stage as well as in the audience.

I often tell myself that Nothing Has Changed because I never knew the man personally and I still have his music. Thanks to Absolute Bowie, I still have the opportunity to lose myself in the live performance.

Come back to Bedford soon, Absolute Bowie. I would love to bake a cake for you. Play more tracks from Heathen for me and Victoria would like some Earthling. We would both also like The Next Day played in full so a 4 hour set would be great. Thank you.

Also thanks to the rather brilliant Victoria Kahl for the gig photos and the tactical hug when it was needed.