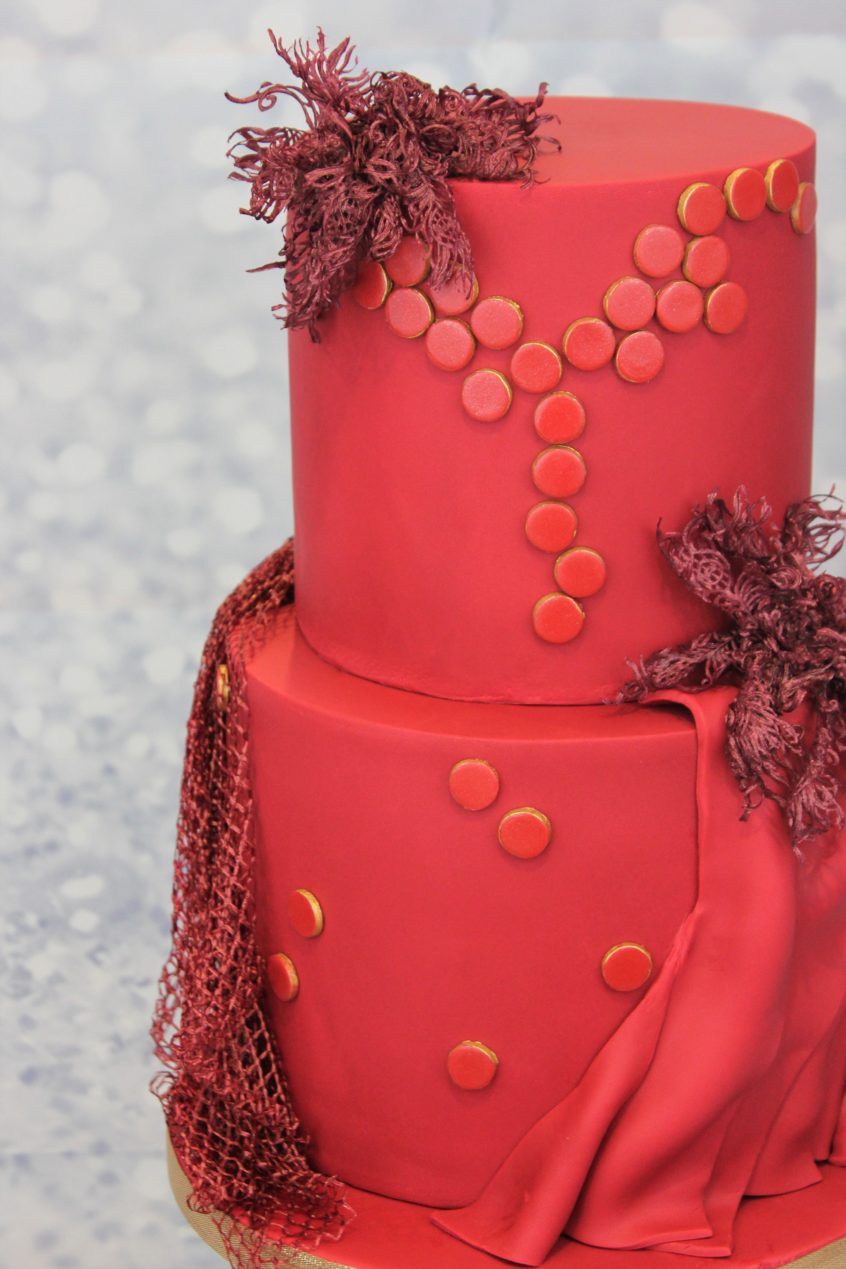 I fell in love with Gone With The Wind (1939) in my early teens; the tale of Scarlett O’Hara and her weird obsession with Ashley Wilkes, when Rhett Butler is infinitely more fanciable, captured my heart and never let go. It is pure melodrama and a feast for the eyes in glorious Technicolor.

Bizarrely, I find myself wary of spoilers in this post as I adore the film so much that I do not want to ruin it for any of you who may not yet have seen it. Honestly, if you have not seen Gone With The Wind, what on earth have you been doing for the last 79 years? I tricked Chris into watching it a few Christmasses ago, selling it to him as ‘a war movie’… which it is… sort of… it’s set in a war. The film is an epic tale of love (mostly unrequited), duty, and survival, set against the backdrop of the American Civil War. Politics are scant and war is characterised as the futile pursuit of stubborn men, the bulk of the tale being about how the women cope with their lives upturned, their men sent away to fight (some never to return), their role in society changing dramatically almost overnight.

I have deleted this paragraph at least three times, re-writing each time as I am acutely aware of my privilege and do not want to speak out of turn but I feel that I have to acknowledge this issue and tell this anecdote. The American Civil War was about slavery and any other reason given is just set-dressing as far as I am concerned; Gone With The Wind is a very 1930s portrayal of this period and, as such, the depictions of black slaves is very 1930s and very Hollywood. Cue slaves singing cheerfully in cotton fields, the ‘step and fetch it’ caricatures, the lazy house slave, the comically stupid girl house slave, and the formidable Mammy. For her performance as Mammy, Hattie McDaniel became the first African American to win an Academy Award – she even beat Olivia de Havilland from the same film to the honour and I’m sure de Havilland had more screen time and the more typical OSCAR role, crying, nearly dying, et al – yet Hattie was segregated from her peers at the after party. Hollywood takes one step forward, and two steps back. When criticised for being complicit in the negative depiction of black Americans on screen, Hattie replied that she would rather be paid well for playing a maid on screen than paid poorly as a maid in real life.

Brightly coloured, high production value escapism, Gone With The Wind showed in London’s cinemas throughout World War Two and crowds of bombed out Londoners flocked to forget the war for 4 glorious hours. With such a weighty running time, this film was a bit of a bumper bargain!

In the film’s closing scenes, Vivien Leigh is resplendent as our heroine in a burgundy velvet gown, trimmed with ostrich feathers and tulle. Rhett Butler describes the look as ‘nothing modest or matronly.’ No-one could do resting bitch face quite like Vivien Leigh.

For my latest tutorial in Cake Decoration & Sugarcraft Magazine (March 2018) I have created a design inspired by this dress in honour of Vivien Leigh. To say that I am enjoying writing this current series of tutorials would be an understatement! Vivien Leigh did not have an easy ride of it and there is a part of me that wonders if she would have fared a little better in the 21st century, with our increasing awareness of mental health issues – her life was sadly burdened by troubles and sadness, though she was often characterised as being just a bit difficult, insecure, hysterical. 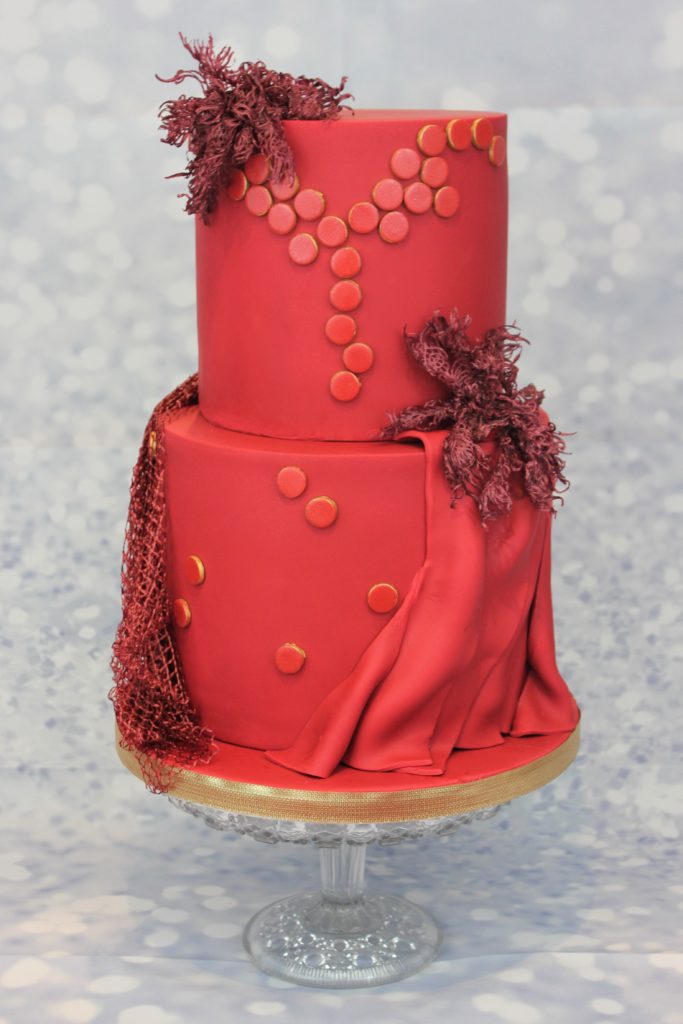 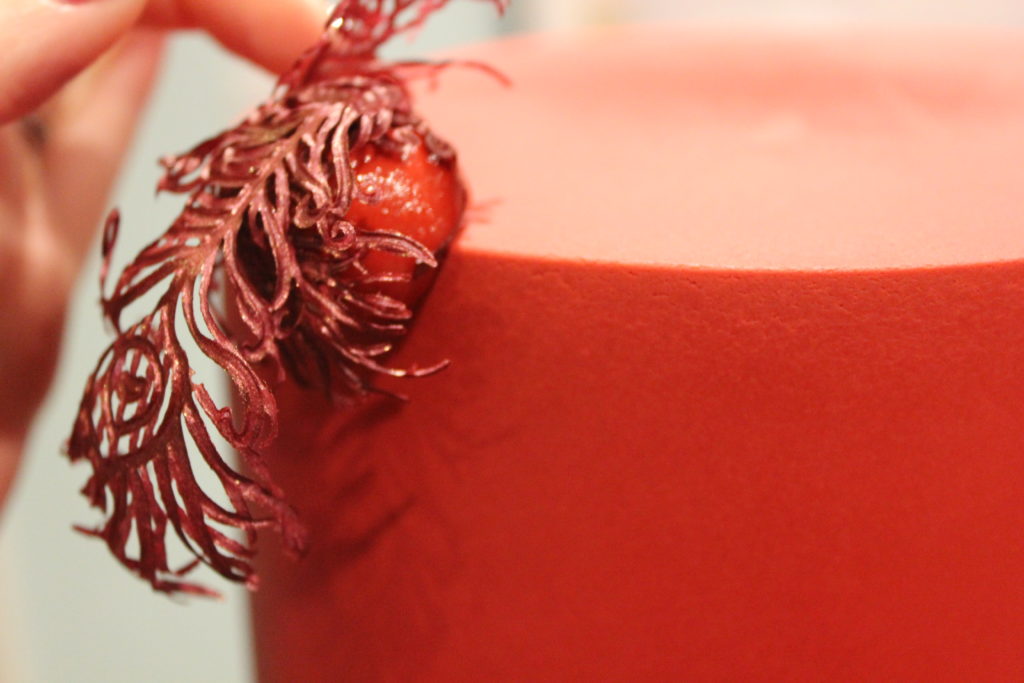 The sugarpaste I used is The Sugarpaste, which is my top tip for an infinitely usable icing which can cope with a lot of colour added to it.

Keep a look out for the March 2018 issue of Cake Decoration & Sugarcraft when it hits the newsstands shortly! Click here to subscribe today and never miss one of my Hollywood inspired bakes! Next month I bake for real Hollywood royalty… I wonder who it could be?